With more than 30,000 foreign terrorist fighters from some 100 countries around the world, terrorism is a global threat requiring a comprehensive and unified response, a top United Nations counter-terrorism official said today.

With more than 30,000 foreign terrorist fighters from some 100 countries around the world, terrorism is a global threat requiring a comprehensive and unified response, a top United Nations counter-terrorism official said today.

“There is no doubt that the threat from terrorism remains persistent and, unfortunately, credible, as demonstrated in many places,” said Jean-Paul Laborde, Executive Director of the UN Counter-Terrorism Committee Executive Directorate (CTED) at a press briefing at UN Headquarters in New York this afternoon.

“A country cannot, and is not in the position, to fight this phenomenon alone,” he added.

Speaking to reporters ahead of a Security Council briefing regarding resolution 2178 (2014), on stemming the flow of foreign terrorist fighters, Mr. Laborde highlighted that while the territorial expansion and military force of the Islamic State in Iraq and the Levant (ISIL/Da'esh) was reduced in recent months, the group's capacities have been changing into those of a “real terrorist organization.”

Indeed, he said, this year the group was able to “commit or indirectly inspire” at least 393 attacks in 16 countries during the month of Ramadan, from 6 June to 5 July, the majority of which occurred in Iraq and Syria.

The Executive Director said the world was not “becoming a safer place anytime soon because of this flexibility.”

“The first action is really to reduce to zero the territory of Da'esh (ISIL). This means that the so-called 'caliphate' cannot anymore be a hope for anybody,” Mr. Laborde said.

The Executive Director also stressed the importance of cooperation in international counter-terrorism efforts, including with civil society and the private sector. In that regard, he noted that police forces should have improved intelligence through better relationships with communities, which could motivate people to speak to authorities when suspicious activities occur.

“We will not – as the universal community as a whole – we will not be in the position to counter terrorism effectively without the support of not only the governments but the society. This is a society which is a base for revolt against the terrible acts against the victims, against civilians. That's where perhaps also we have to be more vocal in terms of the UN,” the Executive Director said.

In response to a question regarding Da'esh using images of children killed by airstrikes as a means to inspire “revenge” attacks, Mr. Laborde stressed that the group does not defend those civilians to claim retaliation for them. Instead, the group uses whatever means available to propagate a “culture of death,” he said. 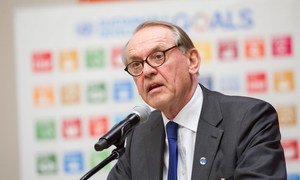