The first ever progress report on the new global development agenda provides the most up-to-date statistics on poverty, hunger, education and sanitation, among others, so that the world can address urgent global challenges over the next 15 years.

Officially launched by Secretary-General Ban Ki-moon at the ministerial meeting of the UN High-level Political Forum on Sustainable Development (HLPF) on Wednesday, the report was detailed today to highlight its most important asset – the global data it contains.

“We have the chance to truly set the world on a different sustainable path leaving no one behind,” Assistant-Secretary-General for Policy Coordination and Inter-Agency Affairs, Thomas Gass, today told the press in New York.

The annual Sustainable Development Goals Report is an opportunity “to review where the world stands at the start of this collective journey,” Mr. Gass added.

He then listed a number of figures – about 800 million people around the world live in extreme poverty and hunger, 5.9 million children die before they reach the age of five, 59 million of primary school age are out of school, 2.4 billion people still lack improved sanitation facilities, one in two children under the age of five lack birth certificates.

The proportion of the global population living below the extreme poverty line dropped by half between 2002 and 2012, from 26 to 13 per cent. This translated to one in eight people worldwide living in extreme poverty in 2012.

These statistics are at the core of the progress report which is the baseline for evaluation and follow-up of the 2030 Agenda for Sustainable Development and the 17 SDGs.

“It is crucial to build a global data ecosystem replete with quality reliable and timely data,” said Mr. Gass, speaking alongside Francesca Perucci, Chief of the Statistical Services Branch.

The global data is part of the 169 targets which will guide the plan of action for people, planet and prosperity from this year through 2030.

The Indicators were developed by experts representing 28 national statistical systems through an “open, inclusive and transparent process,” Mr. Gass said.

In April 2016, 175 Member States signed the historic Paris Agreement, which sets the stage for ambitious climate action by all to ensure that global temperatures rise no more than 2 degrees Celsius.

While the 17 Goals were universally accepted and approved by all 193 Member States last year, the indicators still have to be adopted by the UN’s Economic and Social Council and the General Assembly.

“The idea is that every country would provide the data – all the goals and all the targets are valid for all the countries,” Mr. Gass underscored in today’s press conference.

This week’s report is the first progress report since the launch of the SDGs. Progress reports are expected every year for the next 14 years and will be presented to the High-level Political Forum, which is the UN’s central platform for the follow-up and review of the SDGs.

During his speech yesterday, Mr. Ban said he would convene an event on 21 September for countries to deposit their instruments of ratification on the Paris Agreement on climate change, an accord that was adopted in December last year and will enter into force when 55 countries ratify, and 55 per cent of global greenhouse gas emissions are accounted for.

In April, 178 countries signed the Paris Agreement at the UN Headquarters, and 19 countries have so far ratified. But these 19 countries accounted for less than 1 per cent of greenhouse gas emissions.

Mr. Ban encouraged at least 40 countries who committed that they will ratify this Paris Agreement before the end of this year, including the United States, China, Australia, Indonesia, Mexico, and Argentina.

He noted that a key feature of this year’s Forum is the voluntary national reviews, a mechanism that allows Governments to voluntarily present what they and their societies are doing to implement the 2030 Agenda. This year, 22 countries will share their experiences.

“Ensuring progress in achieving the SDGs will be greatly enhanced by making sure that lessons are shared and best practices are replicated,” he explained, calling on Member States to intensify efforts at follow-up and review through a participatory process, with the full engagement of the business sector and civil society. 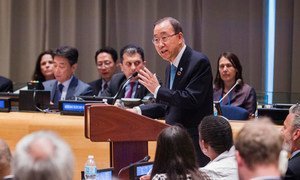