United Nations Secretary-General Ban Ki-moon today said that the nuclear deal agreed to last year by Iran and six world powers is the best way of ensuring the exclusively peaceful nature of Iran’s nuclear programme, calling for the comprehensive implementation of the accord, as well as a subsequent Security Council resolution that endorsed it.

In a statement issued today, the Secretary-General congratulated the Council and the participants in the Joint Comprehensive Plan of Action (JCPOA) on the first anniversary of the “historic achievement” and commended progress made so far.

On 20 July last year, the Council adopted resolution 2231 (2015), endorsing the JCPOA under which Iran pledged that it would not seek, develop or acquire nuclear weapons. The resolution called the deal a “culmination of diplomatic efforts” by Iran and the so-called E3+3 – China, France, Germany, Russia, the United Kingdom and the United States.

In his statement, Mr. Ban said the JCPOA was “a triumph of diplomacy” for conflict resolution and prevention, and strengthened global norms for nuclear non-proliferation.

He explained that, combined with a robust verification regime, the agreement ended one of the Council’s strictest sanctions regimes, and provided Iran with the opportunity for greater engagement with the international community.

“Resolution 2231 (2015) heralded a fundamental shift in Iran’s relationship with the Security Council, and provided a defined time schedule for the removal of the Iran nuclear issue from the Council’s agenda,” the Secretary-General said.

He also commended Iran for implementing its nuclear-related commitments, as verified by the International Atomic Energy Agency, while also applauding the steps taken by the European Union and the United States.

“One year on, I remain certain that the JCPOA is the best way to ensure the exclusively peaceful nature of Iran’s nuclear programme and to realise the great aspirations of the Iranian people,” he said, calling for the agreement and resolution 2231 to be implemented in a comprehensive manner, based on mutual respect and mutual benefit.

That would facilitate greater cooperation to achieve international peace and security, he added. 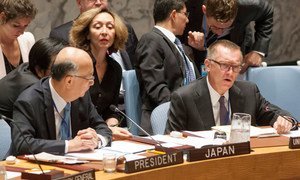 On anniversary of Iran deal, UN calls for implementation of Joint Comprehensive Plan of Action