The situation around South Sudan remains tense, the United Nations peacekeeping mission in the country today said, calling on all parties to uphold their responsibilities to protect civilians – including UN staff.

At a briefing for reporters at UN Headquarters in New York, Deputy Spokesperson Farhan Haq said the UN Mission in South Sudan (UNMISS) is encountering harassment of its personnel and increased levels of obstruction of its operations, including denial of flight clearances.

In Bor, restrictions are being placed on UNMISS patrols outside of Bor town and Bor market, the spokesperson said.

UNMISS has also received “deeply disturbing” reports of sexual violence, including rape, by soldiers in uniform against a number of civilians around UN House in the capital, Juba. The Mission is looking into these reports, which, if true, may constitute a war crime, Mr. Haq said.

“UNMISS calls on all parties to uphold their responsibilities to protect civilians and underscores that those perpetrating these entirely unacceptable attacks will be held accountable,” the spokesperson said.

In addition, the spokesperson said that UNMISS is calling for an immediate release of the journalist Alfred Taban, who was arrested by the National Security Services, and for protection of freedom of expression. Mr. Taban is the founder and editor in chief of a leading independent newspaper in the country.

Meanwhile, in the capital city of Juba, UN peacekeepers are continuing to patrol in and around UN House, where some 29,000 civilians have taken refuge; there are some 3,000 civilians in the adjacent Tomping compound.

South Sudan – which this month marked its fifth anniversary since splitting from Sudan – has spent much of its short life at war with itself, riven by a political face-off between President Salva Kiir and his then former Vice-President Riek Machar. Some 2.4 million people fled their homes in fear, before an August 2015 peace deal ended the major offensives that erupted into a full-blown conflict in late 2013.

Despite the August 2015 peace agreement that formally ended the war, conflict and instability has spread to previously unaffected areas in the Greater Equatoria and Greater Bahr-El-Ghazal regions. This past month, deadly clashes in Wau resulted in the deaths of more than 40 people, while up to 35,000 fled their homes. Such fighting is characteristic of the trend that produced fresh refugee outflows this year. 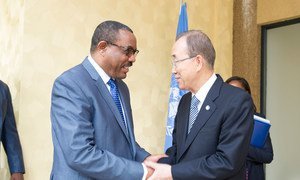 In Rwanda, Ban calls for concerted regional and international action in South Sudan

On the margins of the 27th African Union (AU) Summit taking place in Kigali, Rwanda, United Nations Secretary-General Ban Ki-moon today addressed a regional body and met with several regional leaders, stressing the need for concerted action to revive the implementation of the peace agreement in South Sudan.