UNICEF/Andrew Esiebo
A nutrition screening for children in the Dalori camp for internally displaced people, in the north-eastern city of Maiduguri in Borno State, Nigeria.
19 July 2016

About a quarter of a million children in Borno state, north-eastern Nigeria, are suffering from severe malnutrition, the United Nations children’s agency today announced. Of those, about one in five will die if they do not receive treatment.

The UN Children’s Fund (UNICEF) said that as Boko Haram is pushed out and more of the north-east area is becoming accessible to humanitarian assistance, the extent of the nutrition crisis is becoming more apparent.

“Some 134 children on average will die every day from causes linked to acute malnutrition if the response is not scaled up quickly,” said

Manuel Fontaine, UNICEF Regional Director for Western and Central Africa, who just returned from a visit to Borno state.

“We and all partners and donors to step forward to prevent any more children from dying. No one can take on a crisis of this scale alone.”

“There are 2 million people we are still not able to reach in Borno state, which means that the true scope of this crisis has yet to be revealed to the world,” he stressed.

The situation in the Lake Chad Basin overall has been the subject of discussions at regional dialogues and at the UN Headquarters. Around 3.8 million people are currently facing severe food insecurity across the Basin, where the lean season has now set in in many parts.

In early 2016, UNICEF appealed for $55.5 million to respond to the humanitarian crisis in north-east Nigeria, but has so far only received $23 million, the equivalent of 41 per cent. 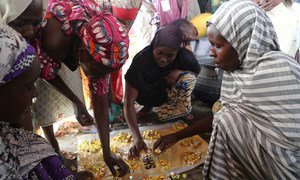