FAO/Patrick David
As of June 2016, 4.6 million people are severely food insecure in the Lake Chad basin, of which 65 per cent are located in Northeast Nigeria, especially in the Borno and Yobe States.

18 July 2016
The top United Nations humanitarian official for Africa’s Sahel region has expressed gratitude to the United States and the European Union for their financial support for people affected by violence in countries surrounding the Lake Chad Basin region – and called for greater international support.

In a joint news release, partly produced by the UN Office for the Coordination of Humanitarian Affairs (OCHA), the US recognised the efforts made by governments in the region, and will increase its support for UN agencies and non-governmental organizations by $27 million to a total of $112 million in the current fiscal year, while the EU will allocate €58 million in 2016 to support those most in need. The EU allocation forms part of the EU’s overall humanitarian action in the wider Sahel region, amounting to more than €200 million this year.

“I am very grateful for this funding from the United States and the European Union. Together with support from the Central Emergency Response Fund which has provided over $102 million for humanitarian aid in the Lake Chad Basin, UN agencies and their partners can scale up their work for survivors of the crisis, including displaced persons and communities hosting them, in line with our 90-day plan which we issued at the beginning of July,” the UN Regional Humanitarian Coordinator for the Sahel, Toby Lanzer, said in the joint news release issued late last week.

“I very much hope that other members of the international donor community will follow the US and EU’s example and support our response in order to avoid a deeper, broader and more costly crisis in the months to come,” he added.

According to OCHA, the Sahel region continues to be affected by extreme poverty, chronic food insecurity and malnutrition, climate change, and violent extremism. The particular situation in the Lake Chad Basin – which borders Cameroon, Chad, Niger and Nigeria – has been the subject of discussions at regional dialogues and at the UN Headquarters. Some 9.2 million people in the area are in need of humanitarian aid, 5.2 million face severe food insecurity and are in need of emergency food assistance, and 2.7 million have been forced to leave their homes and those hosting the displaced are sharing their already very limited resources. In addition, the local population is facing a very steep increase in the price of food.

The US and EU funding announcements follow a joint visit to Cameroon, Chad and Niger by Mr. Lanzer, the US Assistant Secretary of State for Population, Refugees and Migration, Anne Richard, the EU Commissioner for Humanitarian Aid and Crisis Management, Christos Stylianides.

In the joint news release, both Ms. Richard and Mr. Stylianides also expressed concern over the violence facing refugees and displaced people in countries surrounding the Lake Chad Basin, and also called on the international donor community to increase their financial support for those affected by the violence.

The joint news release noted that the main priorities of the humanitarian response to the Lake Chad Basin are protection, food assistance, nutrition, healthcare, shelter, emergency education and water, sanitation and hygiene. 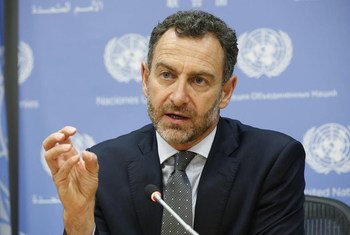 28 June 2016
More than 9.2 million people in the Lake Chad Basin are in need of humanitarian assistance and more than 4.4 million face severe food insecurity, a senior United Nations relief official said today, appealing for greater efforts from the international community and development partners to meet the region’s growing needs.