“Achieving the SDGs [Sustainable Development Goals] is a monumental task. There is no country in the world where all people have equal opportunities to fulfil their aspirations. Every country has poverty and inequalities to address. Every country has environmental problems to remedy,” the Deputy Secretary-General said at the opening of a three-day ministerial meeting of the high-level political forum on sustainable development at UN Headquarters in New York.

“Different countries have different challenges. But we know we will all need to change our mindsets and how we act to effectively implement this ambitious new agenda,” added Mr. Eliasson, speaking on behalf of Secretary-General Ban Ki-moon who is currently in South Africa for the International AIDS Conference.

The forum – convened under the auspices of the Economic and Social Council (ECOSOC) – is part of a 2016 high-level segment being held from 18 to 22 July. Bringing together representatives from UN Member States, civil society actors, academia and the private sector, it represents the culmination of ECOSOC's 2016 cycle and addresses the Council's overall annual theme, “Implementing the post-2015 development agenda: moving from commitments to results.”

The Deputy Secretary-General noted that when Member States met at the same forum last year, they were just weeks away from the adoption of the 2030 Agenda for Sustainable Development – a 15-year anti-poverty, pro-planet action plan – although they did not reduce the level of ambition during those negotiations.

He also highlighted that it is reassuring that many countries have already started a “serious process” of implementation, building on lessons learned from the Millennium Development Goals (MDGs) as well as their own experiences, while other countries are working on setting the stage for implementation.

“The shift from the MDGs to the SDGs is huge. The Sustainable Development Goals are universal, integrated, indivisible and mutually re-enforcing,” the Deputy Secretary-General stressed, adding that new ways of thinking, acting and organizing – particularly at the country level – are needed, along with different ways of communicating and clear ways of measuring progress.

For its part, the forum has a unique and crucial role in following up and reviewing implementation of the 2030 Agenda for Sustainable Development, Mr. Eliasson said, noting that the complexity of the meeting's tasks will require progressive adjustments, especially with regard to national voluntary reviews.

“We live in a turbulent world with growing uncertainties about the road ahead. There are polarizing, inward-looking trends. At the same time, the world is a world of promises and opportunity with many, many working to fulfil the dreams and aspirations of our peoples,” the Deputy Secretary-General said.

“If we work together, both inside and between nations mobilizing all good forces we can achieve a better world of peace, opportunity and dignity for all,” he concluded.

In addition to the ministerial-level meeting, the high-level segment includes on an annual basis a dialogue with international financial and trade institutions; a thematic discussion; a dialogue with the executive secretaries of the regional commissions; introduction of the Secretary-General's reports on ECOSOC's overall theme and other reports; and a general debate.

Also speaking today was ECOSOC President Oh Joon, who highlighted that the Council's role is essential for successful implementation of the 2030 Agenda.

“This year's work, in particular, represents a threshold, a new beginning, and a higher level of expectation for how the multilateral system will function at the global level in keeping with the Agenda's vision,” he said.

“The world is watching to see how we use this precious opportunity,” he added.

In addition, Mr. Oh noted that the theme of this year's forum, “Ensuring that no one is left behind,” represents the solemn promise made to the world when the international community agreed on the 2030 Agenda.

In order to deliver on that promise, the voices of all States must be heard, from all regions and all sectors, he said, adding that the forum must be the “global early warning system to ensure that we act together in time and adjust our actions when needed.” 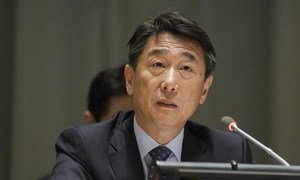