In Rwanda, Ban calls for concerted regional and international action in South Sudan

On the margins of the 27th African Union (AU) Summit taking place in Kigali, Rwanda, United Nations Secretary-General Ban Ki-moon today addressed a regional body and met with several regional leaders, stressing the need for concerted action to revive the implementation of the peace agreement in South Sudan.

On the margins of the 27th African Union (AU) Summit taking place in Kigali, Rwanda, United Nations Secretary-General Ban Ki-moon today addressed a regional body and met with several African leaders, stressing the need for concerted action to revive the implementation of the peace agreement in South Sudan.

“Now is the time for decisive and collective action. The people of South Sudan need to hear the region and the world speak with one voice to end this mindless violence,” Mr. Ban said at the Extraordinary Summit of the International Governmental Authority on Development (IGAD), an eight-country trade bloc in Africa whose members include the Governments of Djibouti, Eritrea, Ethiopia, Kenya, Somalia, South Sudan, Sudan and Uganda.

“I know many of you have worked hard to secure peace for the world's youngest country – and I know all of us agree that we cannot afford South Sudan slipping back into a civil war,” he added.

Noting that everyone is “appalled” by the magnitude of the violence, the indiscriminate attacks on civilians and peacekeepers, and the immense loss of lives and suffering that the crisis has inflicted on the people of South Sudan, the UN chief emphasized that the renewed fighting is “horrendous and totally unacceptable.”

“UN compounds have been caught in the crossfire, our warehouses and food stocks for hundreds of thousands of people have been brazenly stolen, and our premises have sustained significant mortar and small arms fire,” Mr. Ban said.

The Secretary-General condemned in the strongest terms the targeting of UN personnel and international personnel from non-governmental organizations; premises and assets in Juba allegedly by soldiers from the Sudan People's Liberation Army (SPLA); and reports of sexual violence, assaults and killings of those personnel and South Sudanese civilians.

Welcoming the strong condemnation of the fighting and ceasefire violations by the AU Peace and Security Council and the IGAD Council of Ministers, the Secretary-General thanked the participants at the Extraordinary Summit for calling on the South Sudanese leaders to assume their responsibility and subject individuals who undermine the peace process to “stern measures,” including targeted sanctions.

Mr. Ban highlighted that he had spoken with the Special Envoy of the President of South Sudan, Nhial Deng Nhial, with First Vice-President Riek Machar, as well as with some leaders of the region, and had urged them to do “everything in their power” to bring about an immediate cessation of hostilities and recommit to the implementation of the peace agreement.

“I have sent a clear message that leaders must be accountable for their actions. This includes the military chain of command – the chiefs of general staff and other officials who are complicit in perpetrating the violence,” the Secretary-General said.

Mr. Ban met with Hailemariam Dessalegn, Prime Minister of Ethiopia and Chairman of the Inter-Governmental Authority on Development (IGAD). The leaders discussed regional peace and security challenges, as well as climate change, with the Secretary-General commending the leadership role of Ethiopia in the promotion of regional peace and security, and its contribution to peacekeeping.

“The Secretary-General and the Prime Minister expressed alarm at the situation in South Sudan and the risk of further escalation, with far-reaching consequences for the country and its people, as well as for the region,” said a statement issued by Mr. Ban's office.

“They agreed on the need for an urgent and enhanced international action to avert full blown violence and further atrocities, and put back on track the implementation process of the agreement on the resolution of the conflict in South Sudan,” the statement also said.

The UN chief informed the Prime Minister about his recommendations to the Security Council in favour of an arms embargo, the imposition of targeted sanctions against individuals involved in violence and blocking the implementation of the peace agreement, and the reinforcement of the UN Mission in South Sudan (UNMISS).

The Secretary-General indicated that he was looking forward to the outcome of the deliberations of the IGAD and AU Heads of State and Government, emphasizing the “important role” of the African leaders.

The Secretary-General also thanked the Ethiopian Prime Minister for his country's key role and sacrifices towards stabilization efforts in Somalia, emphasizing the need to “spare no efforts” in creating the required security conditions for the successful holding of the forthcoming elections.

In addition, Mr. Ban underlined the debilitating effects of the El Niño and La Niña weather phenomena globally and in the Horn of Africa region in particular. The Prime Minister informed him of the steps taken by Ethiopia to mitigate the impact of La Niña and its commitment to the global efforts to address climate change, including through the early ratification of the Paris Agreement.

The Secretary-General also met today with Idriss Déby Itno, President of Chad and Chairperson of the AU. Commending Mr. Déby for his country's critical role in the regional efforts to combat the Boko Haram terrorist group, Mr. Ban reiterated the UN's support in that regard.

During that discussion, former Presidents Konare and Mogae updated the Secretary-General on their efforts for peace in South Sudan, including recent consultations in Juba with South Sudanese leaders, with the UN chief commending them for their efforts and encouraging them to remain steadfast.

Acknowledging the seriousness of the situation and the risk of relapse into conflict and that of further and widespread atrocities against the civilian population, the Secretary-General and the two former Presidents agreed on the “urgency of concerted regional and international action to address the current challenges and bring about lasting peace and security in South Sudan.” In that respect, they emphasized the role of IGAD and of African leaders.

In addition, Mr. Ban met with the President of Uganda, Yoweri Kabuta Museveni, on the situation in South Sudan.

In another meeting today, the Secretary-General discussed the situation in South Sudan with Gayle Smith, Administrator of the United States Agency for International, together with the Assistant Secretary of State for African Affairs, Linda Thomas Greenfield, and the United States Special Envoy for South Sudan, Donald Booth. The leaders expressed grave concern about the risk of further violence in the country, as well as the “appalling” humanitarian situation compounded by the recent fighting in Juba.

“They look forward to the outcomes of the deliberations of the IGAD and African Union leaders on the matter, hoping that these will provide additional momentum to the international efforts to address the security situation, in particular in Juba, and ensure the effective implementation of the peace agreement,” said a statement issued by Mr. Ban's office.

On Friday, Mr. Ban met with a number of African leaders on the sidelines of the AU Summit, including the Minister of Foreign Affairs and International Cooperation of Algeria, Ramtane Lamamra. 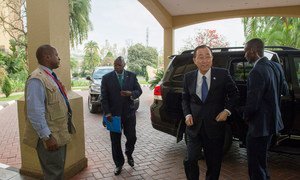 In Rwanda, Ban meets with African leaders on situation in South Sudan