The responsibility for finding solutions to the problems affecting young people – such as unemployment, low representation in political processes, and social exclusion – lies largely with Governments, according to a United Nations report on youth engagement released today.

The World Youth Report on Youth Civic Engagement, compiled by the UN Department of Economic and Social Affairs (DESA), explores young people’s participation in economic, political and community life, and is intended to serve as an impetus and tool for policy discussion between youth and government.

On economic engagement, the report notes that unemployment affects more than 73 million young people around the world, with the jobless rate exceeding 50 per cent in some developing countries. In low- and middle-income countries, underemployment in the informal sector is considered the primary employment challenge among young people.

In addition, inadequacies in skills and education, the lack of support for entrepreneurship, and diminishing labour rights have negatively affected youth economic engagement.

The report warns that an increasing number of companies and organizations are offering, often full-time and unpaid, internships for recent graduates. In many of such incidents, internship is not necessarily linked to specific educational outcomes, but replaces the work of regular paid workers.

“In addition, it is now not uncommon for young people to undertake numerous back-to-back unpaid or low-paid internships as they struggle to gain a foothold on the career ladder,” the report says. “Far from better preparing young people for economic life, unpaid internships have the potential to leave youth in an economically more vulnerable position than they would be in had they never undertaken the internship in the first place.”

As such, many young people are calling for stronger regulations and the development of benchmarks for quality internships to avoid exploitation, the report says.

At the UN climate change conference in Paris, youth take action by organizing a flashmob, dropping to the ground simultaneously throughout the event’s venue. 3 December 2015. Photo: UNFCCC

Governments often promote youth entrepreneurship while failing to stimulate wider employment creation through robust strategies, “unfairly” shifting much of the responsibility for job creation from the larger public and the private sector to young people.

Youth participation and representation in institutional political processes and policy-making around the world is relatively low, according to the report. Voter turnout in elections tends to be significantly lower among youth than among adults, and young people are less likely to become members of political parties.

Although youth have played a visible and prominent role in demonstrations and protests and have often been instrumental in bringing about changes in governance, the role of young people following political transition remains largely undefined and, in many cases, they remain excluded, the report notes.

In countries experiencing power vacuums, young people can often be coerced, or otherwise forced out of economic necessity, to join violent groups and extremist elements.

The availability of ever-growing numbers of online and social media outlets and other web-based tools has played a huge role in bolstering young people’s activism and participation, but the extent to which cyber activism translates into sustained lifetime political engagement is unclear.

While young people are gradually moving away from institutionalized structures, such as electoral activities and political parties, they are moving towards cause-oriented activism.

Although the extent of their participation has varied, young people around the world have always been active at the community level through volunteerism, peacebuilding efforts and sporting activities.

Community engagement often provides young people with their first experience of active participation in a cause or activity, serving as a gateway to further and broader engagement throughout life as well as opportunities for leadership building.

The report draws a conclusion that in all three of the areas, youth engagement in society relies on the active participation and commitment of Governments. While young people need to play a central role in addressing issues that affect them, they cannot tackle the multitude of challenges alone, particularly in the economic and employment area, it says. 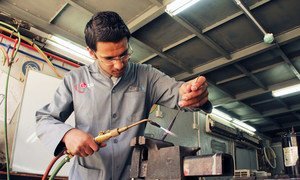 With so many youth either jobless or “working poor,” more investment is needed to empower them through skills development, United Nations Secretary-General Ban Ki-moon said on World Youth Skills Day today.