UNICEF/Samuel Leadismo
Women from Samburu, Kenya, gather for a public discussions where they publicly say no to female genital mutilation.
15 July 2016

“Although female genital mutilation is associated with gender discrimination, our findings show that the majority of boys and men are actually against it,” said Francesca Moneti, UNICEF Senior Child Protection Specialist.

“Unfortunately, individuals’ desire to end female genital mutilation is often hidden, and many women and men still believe the practice is needed in order for them to be accepted in their communities,” she added.

In countries with available data, UNICEF found that 67 per cent of girls and women and 63 per cent of boys and men oppose the continuation of the practice in their communities, while, in some countries, men oppose female genital mutilation more strongly than women.

Moreover, the agency said that in addition to a large majority of people opposing female genital mutilation where it is concentrated, there is evidence of growing momentum and commitment to end the practice.

In 2015, both Gambia and Nigeria adopted national legislation criminalizing the practice. In the 16 countries where data exist, more than 1,900 communities, covering an estimated population of 5 million people, have made public declarations to abandon female genital mutilation, according to UNICEF.

The Sustainable Development Goals (SDGs) adopted by the UN General Assembly in September 2015 include a target calling for the elimination of all harmful practices, such as female genital mutilation and child marriage, by 2030.

UNICEF’s research also reveals a possible link between a mother’s education and the likelihood that her daughter will be cut. Among 28 countries with available data, approximately one in five daughters of women with no education has undergone female genital mutilation, compared with one in nine daughters with mothers that have at least a secondary education.

At least 200 million girls and women alive today in 30 countries around the world have been subjected to female genital mutilation – a range of procedures that can cause extreme physical and psychological pain, prolonged bleeding, HIV, infertility and death, UNICEF said.

UNICEF co-leads, along with the UN Population Fund (UNFPA), a global programme to encourage elimination of female genital mutilation, and currently supports efforts in 17 countries.

♦ Receive daily updates directly in your inbox - Subscribe here to a topic.
♦ Download the UN News app for your iOS or Android devices.
genital mutilation 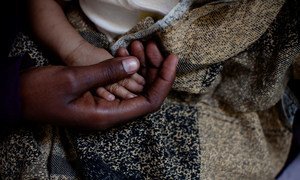