The new sites added to the list – which are selected by the World Heritage Committee of the UN Educational, Scientific and Cultural Organization (UNESCO) as being of special cultural or physical significance – include China's Zuojiang Huashan rock art cultural landscape; the archaeological site of Nalanda Mahavihara in India; and the Persian Qanat in Iran.

The Committee – which has been meeting in Istanbul, Turkey, for its 40th session since 10 July – also selected Micronesia's artificial islets of Nan Madol and simultaneously placed that site on the List of World Heritage in Danger.

Located on the steep cliffs in the border regions of southwest China, Zuojiang Huashan Rock Art Cultural Landscape consists of 38 sites of rock art that illustrate the life and rituals of the ancient Luoyue people.

The sites, which date from the period around the 5th century BC to the 2nd century AD, depict ceremonies that have been interpreted as portraying the bronze drum culture once prevalent across southern China, and are the only remains of this culture today, UNESCO said in a press release.

Excavated Remains of Nalanda Mahavihara: View of Site no. 03 and structure to north of Site no. 1B from East. Photo: UNESCO/ Rajneesh Raj

The Nalanda Mahavihara (Nalanda University) site, located in the State of Bihar in north-eastern India, comprises the archaeological remains of a monastic and scholastic institution dating from the 3rd century BC to the 13th century AD.

Nalanda – the most ancient university of the Indian subcontinent – taught over an uninterrupted period of 800 years, and the historical development of the site testifies to the development of Buddhism into a religion and the flourishing of monastic and educational traditions, according to UNESCO.

Qanats were vital for the ancient Persian people to supply water for agriculture and permanent settlements. These access shafts used to transport water is still in place in some locations, allowing equitable and sustainable water-sharing and distribution.

The 11 qanats representing the Persian Qanat in Iran include rest areas for workers, water reservoirs and watermills. UNESCO highlighted that these Qanats provide exceptional testimony to cultural traditions and civilizations in desert areas with an arid climate.

Nan Madol is a series of 99 artificial islets off the south-east coast of Pohnpeithat in Micronesia that were constructed with walls of basalt and coral boulders, and harbour the remains of stone palaces, temples, tombs and residential domains built between 1200 and 1500 AD.

The ruins represent the ceremonial centre of the Saudeleur dynasty, a vibrant period in Pacific Island culture, UNESCO said, noting that the huge scale of the edifices, their technical sophistication and the concentration of megalithic structures bear testimony to complex social and religious practices of the island societies of the period.

The site was also inscribed on the List of World Heritage in Danger due to threats, notably the siltation of waterways that is contributing to the unchecked growth of mangroves and undermining weakening existing edifices, UNESCO said.

The World Heritage Committee will continue until 20 July and is due to examine a dozen other proposals for potential inscription. 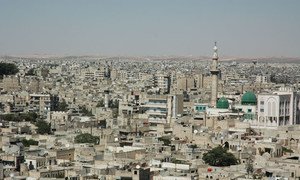 The head of the United Nations cultural agency today deplored the recent shelling at the National Museum of Aleppo, located on the edge of the war-torn ancient city in northern Syria, calling once again for the destruction of cultural property to stop.