The head of the United Nations cultural agency today deplored the recent shelling at the National Museum of Aleppo, located on the edge of the war-torn ancient city in northern Syria, calling once again for the destruction of cultural property to stop.

“The Old City of Aleppo has suffered extensive damage over the last four years. The destruction of the museum is a new blow to the heritage and history of all Syrians. I once again call on all parties to stop the violence and keep cultural heritage out of the conflict,” said Irina Bokova, the Director-General of the UN Educational, Scientific and Cultural Organization (UNESCO).

According to reports confirmed by the Syrian Directorate General for Antiquities and Museums, the National Museum was hit by mortar shells on 11 July, causing extensive damage to the roof and structure of the building.

Aleppo – Syria’s largest city – has been devastated by the ongoing conflict in the country, now in its sixth year and claiming the lives of more than a quarter of a million people. UNESCO, which, as the UN body responsible for identifying significant cultural landmarks, had classified the Ancient City of Aleppo among six World Heritage sites in Syria, launched a three-year action plan

in August 2013 aimed at preventing further losses and repairing damage where and when possible, but all six of those sites are now either destroyed or severely damaged.

Ms. Bokova noted that the National Museum is the most important museum in Aleppo, with thousands of objects reflecting all periods of Syrian history, including an important Islamic section.

Most of the collections had been already evacuated by the Syrian Directorate General for Antiquities and Museums and taken to safe locations, but strong concerns remain for the items that could not be transported, she said.

Reiterating its calls on all parties to refrain from targeting as well as from using cultural property for military purposes, Ms. Bokova emphasized that UNESCO condemns all destruction of heritage since the outbreak of the conflict, no matter who the instigator.

UNESCO works with the Syrian Directorate General for Antiquities and Museums to safeguard Syria’s cultural heritage, through training of professionals, documentation and awareness-raising initiatives.

The Director-General said UNESCO is intensifying cooperation with non-governmental organizations, experts and institutions around the world and all across Syria, to protect Syrian heritage, building on the best of scientific expertise from all sides, in the spirit of the expert meeting held in Berlin on 2-4 June, in cooperation with Germany.

Located at the crossroads of several trade routes from the 2nd millennium B.C., Aleppo was ruled successively by the Hittites, Assyrians, Arabs, Mongols, Mamelukes and Ottomans. The 13th-century citadel, 12th-century Great Mosque and various 17th-century madrasas, palaces, caravanserais and hammams all form part of the city’s fabric.

The Ancient City of Aleppo – which was inscribed on UNESCO’s World Heritage List in 1986 – has been on the List of World Heritage in Danger since 2013. This status was confirmed by the 40th session of the World Heritage Committee, which is taking place in Istanbul from 10 to 20 July.

In other news today, the World Heritage Committee today placed the five World Heritage sites of Libya on the List of World Heritage in Danger, citing damage caused by the conflict affecting the country and the threat of further damage it poses.

The Committee in particular noted the high level of instability affecting the country and the fact that armed groups are present on these sites or in their immediate surroundings.

The Committee made the decision during its examination of the state of conservation of sites already inscribed on the World Heritage List. 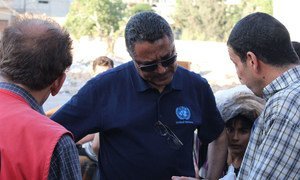 Deploring the spread of hostilities throughout the Syrian city of Aleppo, senior United Nations officials today called on all parties to the conflict to end indiscriminate attacks on civilians and fully respect international humanitarian law.