The situation in eastern Ukraine remains volatile and continues to have a severe impact on human rights. Photo/ UNHCR
14 July 2016

The report, which was prepared by the UN Human Rights Monitoring Mission in Ukraine, stated that the armed conflict in certain districts of Donetsk and Luhansk regions, “accounts for the majority of violations of the right to life in Ukraine over the last two years,” claiming up to 2,000 civilian lives, with nearly 90 per cent of conflict-related civilian deaths resulting from indiscriminate shelling of residential areas.

More than 9,300 people have been killed in Ukraine since the beginning of the separatist conflict in eastern regions of the country in mid-April 2014. The UN Human Rights Monitoring Mission was deployed by the Office of the UN High Commissioner for Human Rights (OHCHR) to the country in March 2014 upon the invitation of the Government of Ukraine.

“Impunity for killings remains rampant, encouraging their perpetuation and undermining prospects for justice,” said the 20-page report, which includes an additional 31-page annex describing more than 60 specific cases, focusing mainly on cases of alleged killings of civilians, and people otherwise protected under international humanitarian law, in the conflict zone while no armed hostilities were taking place in the immediate vicinity of the incidents.

The report also found that significant numbers of people, including civilians, have also been summarily executed or have died in custody, with most such killings occurring in 2014 and early 2015.

According to the report, armed groups mainly executed individuals who had, or were believed to have, vocal “pro-unity” views or to support Ukrainian forces, while Ukrainian forces targeted people based on their alleged affiliation with, or support for, armed groups, or for their “separatist” or “pro-Russian” views.

A reminder of the deadly destruction in the conflict in Mykolaivka in the Donetsk region of eastern Ukraine. Photo: WFP/Abeer Etefa

Numerous allegations of executions of Ukrainian soldiers and elements of armed groups who had surrendered or were hors de combat were also reported, although the full scale of the phenomenon is hard to assess, the report found.

The report noted that there was a widespread lack of discipline in hastily assembled armed groups and within the Ukrainian forces, which included many rapidly mobilized soldiers and volunteer battalions. A significant number of people known to be criminals also joined one side or the other, and these factors led to “an unbridled rule of the gun with armed men readily resorting to violence towards civilians, especially to those who ‘disobeyed’ their orders.”

The Government of Ukraine has investigated and prosecuted some perpetrators of summary executions from its own ranks, although in some cases, investigations are slow or “protracted deliberately so that alleged perpetrators are provided with opportunities to escape justice,” according to the report.

Dozens of people have also died while in custody in the territories controlled by the armed groups. Allegations concerning the death of people in government custody have also been received, with most deaths allegedly caused by torture and ill-treatment, or by inadequate or lack of medical assistance.

The report also documented killings within the armed groups and government forces, including at least 121 cases of “intentional homicide” of Ukrainian servicemen, some of whom were whistle-blowers who revealed the misconduct of Ukrainian forces in the conflict zone. Armed groups have, in some cases, resorted to execution as a punishment for crimes or disciplinary acts for misconduct in their own ranks.

In addition, the report highlighted the large number of deaths that occurred during mass assemblies, especially during the Maidan and Odessa events, for which it said that accountability has so far remained very limited.

As of 1 June, some 55 individuals have been charged in relation to the deaths of Maidan protestors, including ten senior Government officials and 29 former commanders and servicemen of the “Berkut” special police regiment.

However, the investigation into the killings of 13 law enforcement agents at Maidan has been hampered by a law that exempts all people who participated in mass protests, and are suspected or accused of crimes between 21 November 2013 and 28 February 2014, from criminal responsibility, according to the report, which recommended that the law be amended to allow prosecutions for all killings that took place during the Maidan.

The report also highlighted the violence that took place on 2 May 2014, in Odesa, during which 48 people died as a result of clashes between “pro-unity” and “pro-federalism” groups.

OHCHR “remains concerned that the authorities have still not taken appropriate measures to ensure effective investigations into the 2 May 2014 events, nor to protect the independence of the judiciary,” the report said.

Furthermore, the report found that the lack of accountability remains widespread in Ukraine, despite efforts by the Government to bring perpetrators from its own ranks to justice and the pre-trial investigations by the Office of the Chief Military Prosecutor into cases of killing, torture and ill-treatment by members of the armed groups of the self-proclaimed “Donetsk people’s republic” and self-proclaimed “Luhansk people’s republic.”

While acknowledging the challenges faced by the authorities in ensuring justice, including the lack of access to the territories where many of the alleged acts took place, the report noted “an apparent lack of motivation to investigate some cases … especially when it concerns acts allegedly committed by Ukrainian forces.”

“Accountability will be key to the establishment of sustainable peace in Ukraine, including in the eastern part of the country,” said Zeid Ra’ad Al Hussein, UN High Commissioner for Human Rights.

“This is the only way forward, as has been fully and tragically demonstrated by the many countries which have not dealt properly with serious international crimes and human rights abuses, and as a result have sooner or later toppled back into violence,” he added. 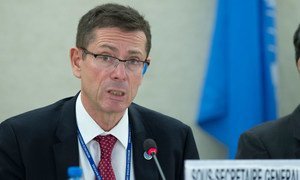