UN Photo/Eric Kanalstein
Displaced civilians leave the UNMISS (UN Mission in South Sudan) base in UN House, after seeking refuge at the base in the wake of recent fresh clashes in Juba between soldiers of the Sudan People's Liberation Army (SPLA) and the SPLA in Opposition (SPLA-IO).
13 July 2016

Given the unstable security situation in South Sudan following clashes between Government and opposition forces which left some 272 people, including 33 civilians, dead, the United Nations peacekeeping chief today proposed that the UN Mission there be extended until the end of August to allow a rapid assessment on the need for a stronger mandate.

“The current situation in the country remains fluid and uncertain,” said Under-Secretary-General for Peacekeeping Operations Hervé Ladsous in his briefing to the Security Council on the activities of the UN Mission in South Sudan (UNMISS), whose mandate will expire on 31 July.

“The Secretary-General's recommendation for a technical roll-over of the UNMISS mandate remains valid and necessary, while we conduct an assessment of the requirements to address the situation on the ground,” he said, adding that the temporary arrangement should be for one month to give the Secretariat time to do a quick assessment, consult the region and the African Union and make recommendations to the Council.

He said that if the Mission needs to be reinforced, including through additional troops and more robust capabilities such as attack helicopters and unmanned aerial vehicles to fulfil a “protection of civilians” mandate, it will be imperative that these reinforcements implement the same mandate as all other troops, and answer to the same chain of command.

Today's meeting comes after days of heightened concern at the United Nations in the wake of the deadly clashes that erupted in and around the capital, Juba, between forces loyal to President Salva Kiir and those backing First Vice-President Riek Machar.

Mr. Ladsous told the Council that as of this morning, humanitarian partners estimated that at least 36,000 civilians have been displaced by the fighting between the Sudan People's Liberation Army (SPLA) and the SPLA in Opposition.

According to initial Government figures at least 272 people have been killed, including 33 civilians. “I am convinced, however, that this is only the tip of the iceberg, given alarming reports over the last few days indicating that civilians were barred from safer grounds, including UN compounds,” he said.

A ceasefire declared by Mr. Kiir on the evening of 11 July, and seemingly endorsed by Mr. Machar, appears to be holding in Juba, with the exception of sporadic shooting heard in parts of the city, he said, noting that the SPLA appears to be in “full control” of Juba.

Reportedly, opposition forces are currently scattered around the areas of Jebel and Yei road while SPLA troops are setting up defensive positions along the Yei and Gudele road. “Further clashes, therefore, cannot be ruled out,” Mr. Ladsous explained.

Juba airport has reopened, and is firmly under the control of the SPLA. The UN Mine Action Service, yesterday, conducted a visual assessment of the ramp, taxiway and runway of Juba airport and did not find any shells or unexploded ordnances.

UNMISS has been able to conduct limited patrolling to assess the security situation and the safety and security of personnel and assets at UN compounds, but securing freedom of movement, however, remains a challenge, with security forces limiting UNMISS's movement every step of the way, citing insecurity, he said, urging the Government to allow UNMISS and humanitarian actors freedom of movement and access to provide vital assistance to the affected civilian population.

He said that some fighting has taken place outside of Juba, and the UN remains extremely worried about the potential for the resumption of violence and spill over into others parts of the country, as it has in the past.

On the political front, several efforts were made by the Special Representative of the Secretary-General and UNMISS chief, Ellen Margrethe Løj, and various regional and international leaders, he said. Members of the Intergovernmental Authority on Development (IGAD) also met in an emergency session in Nairobi, Kenya, on 11 July and issued a communiqué condemning the violence in South Sudan, stressing accountability for the breakdown of rule of law, and demanding a revision of the UNMISS mandate to establish an intervention brigade and increase in the number of troops from the region to secure Juba, among other decisions.

Mr. Ladsous said that late yesterday, media outlets reported that President Kiir dismissed Deputy Foreign Minister Cirino Hiteng, allegedly for his presence at the IGAD ministerial meeting in Nairobi. Mr. Hiteng was an appointee of the Former Detainees party to the peace agreement signed in August 2015. The President's unilateral dismissal of him is a breach of the peace agreement itself, Mr. Ladsous added.

“If this is a forewarning of what is yet to come, only a strong political and coordinated approach can salvage the peace process now,” Mr. Ladsous said, urging the UN Security Council to urgently reconsider an arms embargo, and immediately enact additional targeted sanctions on leaders and commanders blocking the implementation of the peace accord.

“While we were cautiously optimistic about the formation of the Transitional Government of National Unity back in April, it is unclear now what further progress can be made under current conditions,” he concluded. 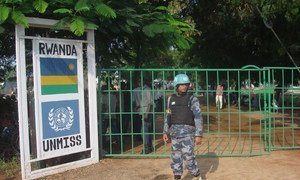 The United Nations Mission in South Sudan (UNMISS) has reported that the ceasefire in the crisis-gripped country appears to be “largely holding, barring sporadic gunfire,” while the UN refugee agency has urged countries to keep their borders open for people fleeing tensions in Juba, where the human rights wings has warned the situation is “deteriorating rapidly.”