FAO/Isaac Kasamani
For the first time since 2006, the H5N1 bird flu virus has been found in Cameroon, putting the number of countries in the region who have battled the virus at six.
13 July 2016

The United Nations Food and Agricultural Organization (FAO) altered Western and Central African governments to be vigilant, and to continue their raised surveillance and prevention efforts after H5N1 avian influenza outbreaks were recently confirmed in chicken farms in Cameroon.

“We're looking at a quickly spreading disease that has devastating effects on livelihoods in communities,” said Abebe Haile Gabriel, FAO Deputy Regional Representative for Africa, in a news release today.

The agency added that the H5N1 strain of avian influenza has caused the death of tens of millions of poultry and losses of tens of billions of dollars worldwide since the virus first spread internationally in 2013. In Cameroon alone, losses have added up to an estimated $20 million, according to local media reports.

The recent outbreak in Cameroon has brought the number of countries that have battled bird flu in West and Central Africa to six, also including Burkina Faso, Cote d'Ivoire, Ghana, Niger and Nigeria.

FAO has also called on the governments to include common messaging to the public and data sharing between the public health and agriculture sectors as part of their prevention efforts.

The statement further noted that a major concern is that the disease may become endemic in the entire region, particularly in Nigeria where avian influenza has become so entrenched in poultry production and marketing systems that it will be difficult to eliminate.

For that reason, FAO said, producers and traders need to be made aware about the clinical signs of the disease symptoms, how and to whom to report it, and implement good hygiene practices to halt its spread.

In its response to the outbreak, the agency is working closely with the UN World Health Organization (WHO) and the World Organisation for Animal Health to offer assistance such as risk assessments, contingency planning, technical advice and laboratory material. They also help with investigating potential avian influenza cases in animals and humans and locating the source of infection.

In Cameroon, FAO is boosting the local veterinary services' capacity to respond rapidly to new outbreaks and is working with the government to finalize an action plan similar to effective plans applied in other countries stricken by the virus.

The agency further said that it will continue to assist governments in mobilizing funds to combat H5N1, in addition to the agency's own efforts to help boost local veterinary systems, strengthen laboratories, and deploying FAO specialists to affected and at-risk countries. It added that it is seeking $20 million to support its regional response to H5N1. 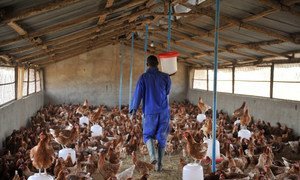 The United Nations Food and Agriculture Organization (FAO) today warned that without timely intervention “to stop it in its tracks,” outbreaks of the highly virulent avian flu virus H5N1, which has already spread to five West African countries in six months, will spread across the region and beyond.