FEATURE: Eradication of Yaws, disease that ‘begins where roads end,’ is within sight, says WHO doctor in new film

UN Photo/BZ
A technician vaccinates a small child, February 1964, in Togo, where the Government carried out an extensive anti-yaws campaign, assisted by experts from the World Health Organization. UNICEF supplied the equipment.
12 July 2016

When Dr. Oriol Mitjà, a Spanish technical adviser for the United Nations World Health Organization (WHO), arrived in Lihir Island, Papua New Guinea, he expected to stay only a month. But after meeting hundreds of children covered in debilitating lesions, he stayed on, found a cure for their ailment, and spurred an international campaign that, if successful, will lead to the eradication of only the second disease in history.

“Yaws is an infection caused by a bacteria that is transmitted by direct contact,” Dr. Mitjà told the UN News Centre yesterday in an interview at the UN Headquarters in New York.

Transmitted by skin contact, the disease affects mostly children between the ages of five and 15, and appears as multiple lesions which eat away at faces, arms and hands, and deepen to the bones, disfiguring the child. Yaws is part of a family of disabling disease that affect the skin – along with leprosy – preventing children from attending school and placing an undue economic burden on local communities.

Incidents of the disease were 95 per cent decreased by 1970, but tens of thousands of people in 13 tropical countries in Africa, Asia and the Pacific, and Central America continue to battle with the disease today.

“Yaws is a neglected tropical disease,” said Dr. Mitjà. “It affects the communities in rural and remote areas, which do not have access to media and to policy decision-making people. So no one cares about them.”

These people live “where the roads end” and where extreme poverty begins, and with it overcrowding, a lack of sanitation and few opportunities for medical services.

This unsettling phrase is also the name of a new documentary film by director Noemí Cuní and her crew, which highlights Dr. Mitjà’s crusade to eradicate Yaws.

“What really moved us to do the documentary was the strength of the doctor. His conviction with his mission of helping all people in the world, and his iron will in fighting and researching until he found this cure that affects mainly children,” Ms. Cuní said ahead of a screening of the film.

The cure, as it turned out, was medically simple – one tablet of an inexpensive antibiotic, Azithromycin. The cost to provide these tablets to 40 million people who need them is about $300 million. Raising this amount is part of a WHO campaign to eradicate Yaws by 2020. If successful, it will only be the second human disease eradicated in history, after small pox.

“Many people are going to discover this disease and I think the documentary can move them to help and try to raise the funding,” said Ms. Cuní.

Mr. Mitjà was only 29 years old when he arrived in Lihir Island, and he had never seen Yaws before.

“Changing something at the local level is changing the world,” Mr. Mitjà said in the trailer to the film. “Our experience at the local level can be extrapolated to other areas. It can have an international impact. The effort of my team, my efforts, can make a difference.” 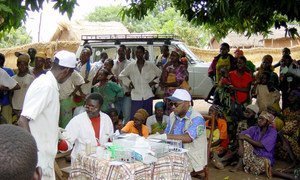 Scaling up investment to tackle leprosy, dengue fever, sleeping sickness and other neglected tropical diseases will improve the health and well-being of more than 1.5 billion people, the United Nations World Health Organization (WHO) said today, launching a new report.