Côte d'Ivoire: UN report finds 'some progress' in fight against rape but stresses more must be done

In a new joint report, the United Nations Operation in Côte d'Ivoire (UNOCI) and the Office of the UN High Commissioner for Human Rights (OHCHR) have called for strengthening rape prevention efforts and to improve the fight against impunity for sexual violence in the West African nation.

“Despite the end of hostilities since 2011 and the respite brought by the gradual stabilization, instances of rape, mainly committed by individuals,” noted a press statement issued yesterday by OHCHR.

It added that the prevalence of rape was probably exacerbated by years of conflict in the country, “which fostered a culture of violence due to the general climate of insecurity and which were marked by persistent impunity due to the lack of systematic prosecution.”

It highlights some progress in the judicial response to these crimes but stressed that it remains clearly insufficient. But it points out that although investigations were opened in 90 percent of rape cases documented in the report, less than 20 percent of them resulted in a conviction.

The report also stresses that all 203 cases that ended in a conviction were “reclassified,” a common practice of judging rape as a lesser offence and for which the sentencing is less severe. Although seen as a way for victims to access justice and facilitate a prompt judgement, this practice, according to the report, “minimizes the gravity of rape.”

It further notes that slow procedures and court decisions, and various shortcomings in the conduct of investigations are also major obstacles in the fight against rape, as well as the stigmatization of victims, many of whom do not lodge complaints.

“Côte d'Ivoire in recent years has recorded significant progress in terms of human rights, but the persistence of rape and impunity towards their perpetrators remain of serious concern and requires urgent action,” said Zeid Ra'ad Al Hussein, UN High Commissioner for Human Rights in the press statement.

“Through the efforts they already deployed, Ivorian institutions have demonstrated that they are fully aware of the scale of the problem, but they must further strengthen their efforts to fight against sexual violence, particularly by implementing the National Strategy against Gender-based Violence, with the support of UN agencies,” said Aïchatou Mindaoudou, Special Representative and head of UNOCI.

As part of its conclusions and recommendations, the report stressed the importance of the National Strategy and its implementation and called for urgent and targeted action to prevent abuse of children.

The report further recommends that the Ivorian authorities “ensure that all victims of sexual violence have access to justice, in particular by providing them with free legal aid” and “consider holding special sessions of the Criminal Courts (Cours d'assises) on rape crimes in order to effectively and promptly fight against such crimes.”

Regarding capacity building, the report recommends to the Ivorian authorities that they “organize and intensify national information and awareness-raising campaigns, including on the prevention and response to cases of rape, in particular against children and in rural areas; engage with community leaders and prefects on the fight against crimes of rape to outlaw amicable settlements and punish those who are involved in such practices.”

The full report, in French, is available here. 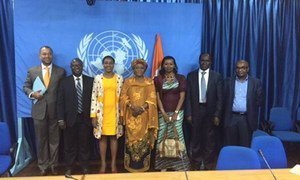 Concluding a three-day visit to Côte d'Ivoire, the United Nations Special Representative on Sexual Violence in Conflict has welcomed progress made thus far by the Government, and in particular by the national armed forces, in addressing sexual violence crimes in the country.