Selecting the next Secretary-General: UN to hold townhall meeting with candidates

The event, Leading the United Nations: A Global Townhall with UN Secretary-General candidates, will be held from 6.00 p.m. to 9.00 p.m., New York time, and be webcast and broadcast live by UN TV and Al Jazeera Media Network across multiple broadcast and social media channels.

This first-ever townhall-style debate follows the landmark informal briefings that began in mid-April, kicking-off the process to select the official that will succeed current UN chief Ban Ki-moon when he leaves office at the end of the year. During those hearings, candidates went before the General Assembly to present their respective ‘vision statements’ on the challenges and opportunities facing the UN and the next Secretary-General, and answered questions from the audience.

Those historic briefings were mandated by the Assembly and are distinct from the Townhall taking place later today. They will continue to be held as further candidates are presented. The next informal briefing will be Thursday, 14 July, when the most recently-nominated candidate, Christiana Figueres (Costa Rica), will take her turn.

Ahead of the Townhall, General Assembly President Mogens Lykketoft said: "In the past, UN Secretaries-General have been chosen behind closed doors. This time, we want to ensure all UN Member States, and the entire world, have a chance to know who the candidates are, what their vision is and see how they perform.”

Ten of the 12 official candidates, nominated by their governments, will be engage in a wide-ranging 60-minute discussion about the challenges and opportunities facing the organization. They will each be given the opportunity at the start to make their case for the job and explain their vision.

“This Townhall is another way to enhance public interest in the mission and work of the United Nations and the need for the best possible candidate for our next Secretary-General," added Mr. Lykketoft.

The General Assembly Hall’s 1,900 seats are expected to be filled to capacity with ambassadors, diplomats, UN staff, journalists and leaders from business and civil society. UN-accredited journalists are also invited to film and record from the media booths.

The 10 confirmed candidates will be split into two groups of five (determined by draw of lots) for a one-hour discussion and question-and-answer session led by moderators James Bays and Folly Bah Thibault from Al Jazeera English. Questions to the candidates from Member States and the global public will come from the floor and via video from around the world.

The two candidates unable to attend the event in New York are Srgjan Kerim (Former Yugoslav Republic of Macedonia) and Miroslav Lajcák (Slovakia). However, both have been invited to send video messages that can be used in the event.Both UN Television and Al Jazeera will provide broadcast feeds and UN Web TV will stream the event live online and on mobile devices at webtv.un.org. Al Jazeera will broadcast, stream and report across its global broadcast and digital platforms. 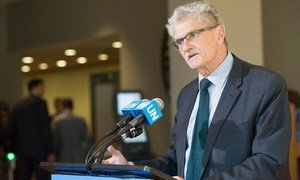