UN Photo/Manuel Elías
Mohammed Ibn Chambas (left), Special Representative of the Secretary-General and Head of the United Office for West Africa and the Sahel (UNOWAS), with African delegates at the Security Council meeting on peace consolidation in West Africa.
11 July 2016

Countries in West Africa and the Sahel must expand intelligence gathering capacities to counter militant threats, such as those posed by Boko Haram, the head of the United Nations operation for that region said today.

“It was indeed the desperation from the perceived lack of opportunities, justice, and hope that contributed to the creation of a conductive climate for emergence of militant movements,” said Mohamed Ibn Chambas, the Secretary-General’s Special Representative and the head of the UN Office for West Africa and Sahel (UNOWAS), in his briefing to the Security Council.

He said that militant movements seen in northern Mali and north-eastern Nigeria threaten to destabilize West Africa and the Sahel region, as well as the Lake Chad Basin area.

Across the Sahel, 4.5 million people are displaced, and six million are in need of emergency food assistance, he explained. Moreover millions cannot farm their land, and millions of children do not receive the education they need for a better future.

Boko Haram continues to change tactics, having twice overrun the city of Bosso in Niger in June, he noted. Terrorists have also struck further afield in West Africa, notably Ouagadougou, Burkina Faso on 15 January, and in Grand Bassam, Côte d’Ivoire on 13 March. Traffickers, criminals, and their collaborators are seeking to benefit from lawlessness and insecurity to expand their networks.

He emphasized to Council members the need to further strengthen regional forces mobilized under the Multinational Joint Task Force, in particular in the area of intelligence gathering, and the need to augment democratic governance as an essential task in conflict prevention efforts.

In addition, efforts towards meeting the basic needs of innocent civilians trapped in this tragedy must be stepped up. “It is deeply troubling, that only 11 per cent of the UN appeal of $1.98 billion in 2016 has been received,” he said.

As of June 2016, 4.6 million people are severely food insecure in the Lake Chad basin, of which 65 per cent are located in Northeast Nigeria, especially in the Borno and Yobe States. Photo: FAO/Patrick David

Warning that the subregion is increasingly threatened by violent extremism and radicalization, he said that UNOWAS organized a regional conference on 27 and 28 June in Dakar, Senegal, in line with the Secretary-General’s Plan of Action to Prevent Violent Extremism.

He said he is setting up a UN Regional Task Force on the Prevention of Violent Extremism to facilitate coordination and complementarity of the UN’s work in this area.

The Cameroon-Nigeria Mixed Commission, which he chairs and which works toward determining the definitive border between the two nations, remains a prime example of the benefits of foresight and cooperation, he said.

“Looking at the underlying challenges in the sub-region and beyond, we also need to think harder, how we can collectively improve international conflict prevention efforts before crises escalate beyond control,” he said. “We owe it to the people of West Africa and the Sahel, who have shown such remarkable resilience to persisting multifaceted challenges.”

Countries in the region are engaged in reviews of their foundational laws, he said. Commissions put in place in Benin, Burkina Faso, Cote d’Ivoire, Liberia, Senegal and Sierra Leone, are working on recommendations to adapt their constitutions to their needs as modern nations.

He said these West African and Sahel countries will hopefully emerge from these reform efforts more cohesive, better governed, and with more women taking part in decision- making. “This would in turn strengthen their resilience to withstand internal and external shocks, such as the recent Ebola outbreak,” he said. 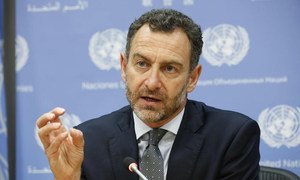