“A strong Forum means faster progress towards the attainment of the 17 ambitious and indivisible Sustainable Development Goals towards inclusive, equitable, and prosperous societies for all,” said ECOSOC President Oh Joon in his remarks.

The High-Level Political Forum will be held from 11 to 20 July at UN Headquarters in New York and it will also include a three-day Ministerial Segment, from 18 to 20 July, which coincides with the High-Level Segment of ECOSOC's annual session.

Recalling the theme of Forum, 'Leaving No One Behind,' Mr. Oh said that the body will assess the implementation of the 2030 Agenda, a year after its adoption.

He noted that the deliberations will focus on enhancing national ownership around the Sustainable Development Goals (SDGs), mainstreaming it in development plans, integrating the three dimensions of sustainable development, addressing challenges in mobilizing means of implementation, and harnessing science, innovation and technology for advancing the Goals.

He recalled that over the previous weekend, the BBC World Service broadcasted live 'My Perfect Country – UN Debate,' a radio show focusing on the importance of policy innovation and integration in the context of sustainable development.

“This show was recorded during the recent ECOSOC Integration Segment, and brought policy experts to reflect on their national experiences and innovations. At this event, UN Secretary-General Ban Ki-moon stressed that 'the SDGs can only be reached through national ownership and local initiative,'” said Mr. Oh.

He further noted that the regional perspective in the implementation of the 2030 Agenda will also be explored in the discussions.

“At the same time, we will assess progress on ensuring that the 2030 Agenda delivers for countries in special situations and facing specific challenges, such as small islands developing States, [least developed countries], [landlocked developing countries] and those in conflict and post-conflict situations, as well as middle-income countries,” added Mr. Oh.

Enumerating the main tasks of the session, he explained: “We will be charting our direction forwards in new and innovative ways to ensure the Forum is substantive contribution to the effective implementation of the 2030 Agenda.”

The session will include national reviews shared by 22 countries from across the world. The volunteer reviews will include the challenges and gaps they encountered.

“I firmly believe that exchanging country experiences and best practices not only benefit individual Member States, but also the long-term implementation of the 2030 Agenda,” said the ECOSOC President.

The Forum will also consider the Secretary-General's annual progress report on the SDGs, compiled in cooperation with the larger UN system, as well as inputs from ECOSOC's functional commissions and other intergovernmental bodies and platforms.

In its work, the Forum will engage with major groups and other stakeholders in the discussions and consider the reports on their contribution to the implementation of the 2030 Agenda.

Mr. Oh expressed hope that the experience gained from the present session of HLPF will be guide the development of subsequent sessions as well as the achievement of the 2030 Agenda.

“A strong Forum means faster progress towards the attainment of the 17 ambitious and indivisible sustainable development goals towards inclusive, equitable, and prosperous societies for all,” he concluded.

The Forum succeeded the Commission on Sustainable Development in 2013, in line with the outcome of the landmark UN conference on global sustainability known as Rio+20. It meets both under the UN General Assembly every four years and the UN Economic and Social Council in other years with technical, ministerial and high level segments.

As part of the substantive deliberations at the Forum, Wu Hongbo, UN Under-Secretary-General for Economic and Social Affairs presented the inaugural report of the Secretary-General on Progress towards the Sustainable Development Goals.

The inaugural report provides the first account of the current global situation relative to the 17 SDGs and it is based on the proposed global indicator framework developed by the Inter-Agency and Expert Group on Sustainable Development Goal Indicators, which were agreed to, as a practical starting point, at the Statistical Commission in March this year, he explained.

“The 2030 Agenda recognizes that eradicating extreme poverty is the greatest global challenge and an indispensable requirement for sustainable development. In the decade from 2002 to 2012, the proportion of the world's population living below the extreme poverty line dropped by more than half, from 26 to 13 per cent,” he said, noting that while significant, there will need to be bolder actions taken in order to eliminate poverty entirely.

“Although progress is undeniable in the fight against hunger, there are still nearly 800 million people worldwide who suffer from hunger,” said Mr. Wu on the status of Goal 2 on ending hunger, achieving food security and improving nutrition and promoting sustainable agriculture.

The report provides an overview of the progress and the challenges implementation of each of the 17 SDGs. It is produced as per a request from the Member States to inform the follow-up and review of the Goals in the context of the Forum. 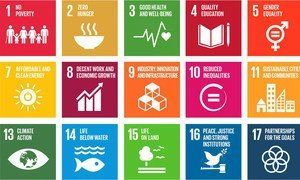