Despite significant gains made in reducing poverty and improving opportunity and well-being for many people around the world, hundreds of millions remain desperate for a chance of a better future, said Secretary-General Ban Ki-moon today in his message on the Day, celebrated annually on 11 July.

“Among those least served by previous development initiatives are girls, particularly those in their formative teenage years,” continued the UN chief, explaining that just when girls should be in school and imagining the possibilities ahead, too many are held back from pursuing their ambitions by social and cultural traps.

While a boy's options and opportunities tend to expand when he becomes an adolescent, those of a girl too often shrink. Moreover, Mr. Ban stressed, half of all sexual assaults worldwide are committed against girls aged 15 or younger. In developing countries, one in three girls is married before she reaches 18. And teenage girls are less likely than teenage boys to start or finish secondary school, he added.

Recalling that “leaving no on behind” is a central objective of the 2030 Agenda , which also includes a specific goal to achieve gender equality and empower all women and girls, the Secretary General urged all Governments, businesses and civil society to support and invest in teenage girls.

“Everyone deserves the benefits of economic growth and social progress. Let us work together to ensure a life of security, dignity and opportunity for all,” he stated.

Investing in teenage girls is critical – not only for girls – but for the world. Photo: UNFPA Niger

In his message, UN Population Fund (UNFPA) Executive Director Dr. Babatunde Osotimehin said: “When [a teenage girl] has no say in decisions about her education, health, work or even marital status, she may never realize her full potential or become a positive force for transformation in her home, community and nation.”

Indeed, he explained, in some parts of the world, a girl who reaches puberty is deemed by her family or community as ready for marriage, pregnancy and childbirth. She may be married off and forced to leave school. She may suffer a debilitating condition, such as fistula, from delivering a child before her body is ready for it. She may be denied her human rights.

“[Yet], when a teenage girl has the power, the means and the information to make her own decisions in life, she is more likely to overcome obstacles that stand between her and a healthy, productive future. This will benefit her, her family and her community,” said Dr. Osotimehin.

He also stressed that investments are needed to protect their health, including their sexual and reproductive health, to enable them to receive a quality education and to expand economic opportunities, including those for decent work.

The UNFPA chief underscored that a teenage girl whose rights are respected and who is able to realize her full potential is a girl who is more likely to contribute to the economic and social progress of her community and nation. 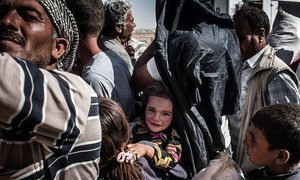