A rapid response mechanism is crucial to tackling an endemic disease such as cholera and eliminating it in Haiti, the deputy head of the UN mission there said today, emphasizing that the effectiveness of such efforts requires predictable financing.

“If we cannot have it [funding] in a predictable nature over the next five years, I believe that we are not having the best rapid response,” Mourad Wahba, Deputy Special Representative for the UN Stabilization Mission in Haiti (MINUSTAH) told the UN News Service.

Since the outbreak of cholera in Haiti in 2010, the UN has worked to contain the disease by focusing on emergency response to save lives, vaccinating the population and implementing preventive measures. Cholera deaths, which over the past six years totalled about 9,000, have decreased to 168 fatalities this year.

Mr. Wahba, who is also Resident Coordinator and Humanitarian Coordinator, underscored the significance of the rapid mobile response teams that travel to communes as soon as there is a suspected case of cholera, working on chlorination in the affected household as well as in surrounding households.

“I think it’s very important in looking at the response to an endemic disease such as cholera to look at two aspects of the response; what I would call the ‘sword and the shield.’ The sword aims at eliminating cholera outbreaks in the communes where they do take place,” the Deputy Special Representative said, adding that the rapid response teams also support cholera treatment centres with supplies such as oral rehydration salts and other therapies, as well as help people recover in order to reduce the lethality of the epidemic.

“The shield aspect of the response is more medium-term, but just as important, because what it does is it aims to prevent the development of an environment which is favourable to Vibrio [bacteria]. This shield part aims at looking at sanitation, reduced open air defaecation, access to potable water for the whole commune, the protection of water sources, so that gradually there is [no longer an] environment in which the cholera Vibrio can actually develop,” he added.

“Because cholera is, to a large extent, a disease of poverty, it remains a problem while there is poverty in Haiti,” Mourad Wahba of Egypt, Deputy Special Representative for the UN Stabilization Mission in Haiti (MINUSTAH) told the UN News Centre.

Another aspect of a comprehensive response to eliminate the disease is a vaccination campaign, the Deputy Special Representative said. Under this component, the Haitian Ministry of Public Health and Population is being supported by the Pan American Health Organization/World Health Organization (PAHO/WHO), as well as by the UN Children’s Fund (UNICEF).

“I think 308 deaths is 308 too many, but it is very much progress compared to where we were just five years ago,” he stressed.

The rapid response mechanism is being supported, along with MINUSTAH, by UNICEF, which works with the Ministry of Health and the response teams and also supports water and sanitation; and PAHO/WHO, which looks at more medium-term interventions, including water and sanitation equipment as well as supplies for the hospital system. 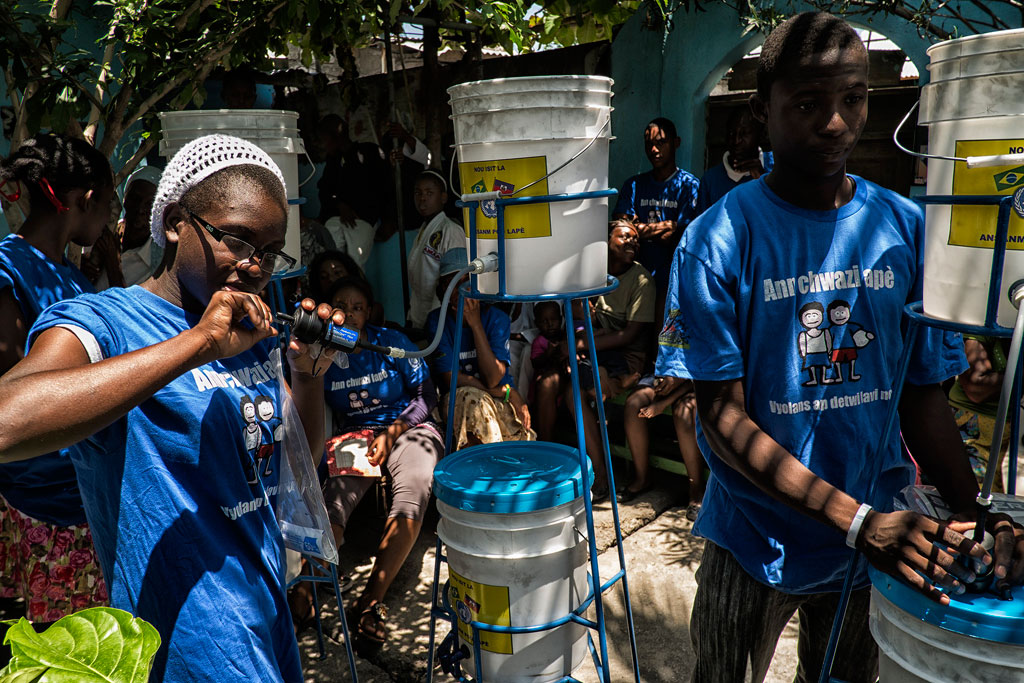 As part of joint efforts between the UN and the Government of Haiti to fight cholera, water filter systems are distributed in Cité Soleil, Port au Prince. MINUSTAH/Logan Abassi

The International Organization for Migration (IOM) is also providing support, while the World Bank is assisting with water and sanitation policies and programming as well as funding elements of the rapid response, the Deputy Special Representative said.

While funding for the rapid response mechanism has been available up until now, for the response to an epidemic such as cholera to “really take hold,” predictable financing is needed, Mr. Wahba said.

“Up to now we have had sufficient funds, but the funds are running out, specifically for the rapid response, where the frequency of the response has decreased in the past month or two because of inadequate financing,” he stressed, adding that the UN’s funding of some $59 million since the start of the epidemic in Haiti explains the rapid progress seen in the elimination of the disease.

Moreover, he said the UN has also supported the Government of Haiti in mobilizing about $300 million for water and sanitation, but for that to continue, predictable funding is required for the next five years.

“The vaccine, combined with chlorination of households which have received the vaccine, I think shows very high efficiency in protection against the disease. And if we are successful in one department, then I believe we’re well on our way to looking at vaccinating the whole country and really eliminating this disease,” he emphasized.

In addition, the Deputy Special Representative highlighted that because of the low prevalence of the disease worldwide, the cholera vaccine is produced in relatively small numbers. However, he remains confident that for 2017 there will be sufficient output from the producers of the vaccine, as well as that the necessary financing will be received.

The latest Cholera Response fact sheet can be found here.

Some 30,000 residents of three localities in Haiti now have access to potable water, thanks to a sanitation campaign launched by the Government and supported by the United Nations following a cholera epidemic that killed almost 100 people in the community.