UN Photo/Manuel Elías
A wide view of the Security Council meeting on the situation in the Central African Republic.
8 July 2016

The Central African Republic’s (CAR) considerable progress over the past two years risks being reversed unless national authorities demonstrated commitment to inclusive and transparent governance, and to addressing the root causes of the crisis afflicting the country, the United Nations peacekeeping chief warned today.

Briefing the Security Council, Under-Secretary-General for Peacekeeping Operations Hervé Ladsous said CAR had made considerable progress since April 2014, adding that after two years of political transition, voters had cast their ballots peacefully and democratically.

“They have offered a positive example in a region where electoral outcomes are often either known in advance or contested,” he said, noting that the successful formation of a new Government has raised expectations for lasting and positive change.

At the same time, he continued, CAR faces a host of challenges, including “a security climate that remains fragile and reversible,” and sometimes non-existent State capacities in various parts of the country. Division, exclusion and marginalization persist alongside low economic development and lack of access to basic services, especially security. Furthermore, armed groups control vast parts of the national territory, presenting a “huge threat” to civilians.

Presenting the findings of the Secretary-General’ special report on the strategic review of the UN Multidimensional Integrated Stabilization Mission in the Central African Republic (MINUSCA), carried out from 7 to 17 May, Mr. Ladsous explained that the goal was to ensure that the Mission’s future mandate is adapted to a post-transition stabilization environment that would facilitate peacebuilding.

Recalling the 19 June detention of six members of the national police by a local self-defence group in the PK5 area of the capital, Bangui, he said that incident — as well as reported renewed efforts to unite the ex-Séléka armed group under the leadership of Nouredine Adam — occurred alongside an alarming humanitarian situation that has rendered 2.3 million people — half the population — food-insecure, with some 20 per cent of the population displaced.

“This is a stark reminder of the fragility of the situation,” he emphasized, and as such, the strategic review recommended that MINUSCA prioritize the protection of civilians, the creation of conditions to facilitate assistance and the return of refugees and displaced persons.

Ambassador Omar Hilale of Morocco and Chair of the Central African Republic (CAR) Configuration of the Peacebuilding Commission, briefs the Security Council at its meeting on the situation in CAR. UN Photo/Manuel Elias

The most important strategic objective over the next two or three years should be to support the reduction of armed groups. In that way, he continued, MINUSCA could assist in creating a secure environment for civilians, help to foster Government services, establish an inclusive political climate favouring the protection of human rights, combat impunity and expand the rule of law.

The special report recommended renewal of MINUSCA’s mandate for 18 months at the current authorized military and police strength, said Mr. Ladsous, outlining a “sequenced and flexible” three-pronged approach to achieving the proposed strategic objective. The Mission would also prioritize the development of a comprehensive approach to addressing the presence of armed groups, including in support of continued dialogue initiated by the country’s President.

Other recommended priority activities would include providing support for implementation of a national disarmament, demobilization and reintegration programme and a community violence-reduction programme, and the coordination of international support for security sector reform, he said. That would entail working with the European Union Training Mission and taking a lead role in reform of the police and gendarmerie.

Among other proposals, he continued, the strategic review recommended continuation of MINUSCA’s urgent temporary measures mandate, at the Government’s request, as well as efforts to assist in the formation of the Special Criminal Court to tackle impunity. “MINUSCA cannot act alone in support of the Government’s efforts,” he stressed.

Partnerships with Bangui, regional stakeholders and other international actors must underpin the strategy under the principles of complementarity and comparative advantages. He welcomed the Government’s efforts to develop a mutual accountability framework, saying it should be endorsed by national and international partners, and go hand in hand with the identification of humanitarian, recovery and peacebuilding needs in advance of the donors’ and investors’ conference planned for Brussels in November.

He pointed out that President Faustin Archange Touadera had put together a Cabinet that included representatives from each of the country’s prefectures and had extended a hand to the armed groups. “The President is clearly trying to break with the past,” he said. “We need to understand that this is a long-haul effort.” The sense of responsibility demonstrated by the new authorities would be essential to mobilizing collective efforts to defend the gains already made. “MINUSCA has to be the last United Nations peacekeeping operation in the country,” Mr. Ladsous emphasized.

Also briefing the Council were Omar Hilale , Chair of the Central African Republic configuration of the Peacebuilding Commission, and Volodymyr Yelchenko , Chair of the Security Council Committee established pursuant to resolution 2127 (2013) concerning the CAR, who both provided updates on recent developments.

Mr. Hilale said that implementation of the Secretary-General’s recommendations would help the authorities move towards stability. The President is benefitting from strong popular support that must be maintained with international support. A transparent and inclusive political process would be the key to ensuring the entire population’s engagement and to facilitating rebuilding of the social contract. “Although the new political reality in the country is full of daunting challenges, it also brings opportunities never seen before,” he said. 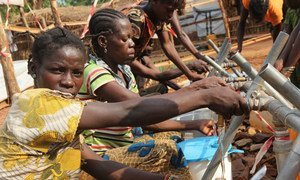 Concluding her seventh visit in the country, Marie-Thérèse Keita Bocoum, the Independent Expert on the situation of human rights in the Central African Republic (CAR), expressed concern about the threats from armed groups and large-scale banditry to the protection of civilians, natural resources and to the crisis recovery process.