Jacques Baudrier
Protestors in New York City demonstrate in the wake of the verdict in the case of the police shooting of Missouri teenager Michael Brown (24 November 2014).
8 July 2016

United Nations officials today spoke out against recent violence in the United States which has left several people dead, expressing both outrage and condemnation over the killings, and highlighting the need for more to be done to fight discrimination.

Earlier this week, two African-American men were shot dead by US police in the states of Minnesota and Louisiana. On Thursday, five police officers were killed in the Texan city of Dallas at a rally over the earlier killings.

“The Working Group [of Experts on People of African Descent] is outraged and strongly condemns the new police killings of two African-American men,” the Group’s Chairman, Ricardo A. Sunga III, said in a statement today, in which he also noted that the incidents demonstrate “a high level of structural and institutional racism.”

“These killings, which were captured on video, cannot be ignored. We call for prompt independent investigations to ensure the perpetrators are prosecuted and punished,” he added.

“There is no justification for such violence. Those responsible compounded the suffering that many in the United States feel following the killing of two African-American men over two days. Those killings must be the subject of a thorough and impartial investigation,” the spokesman said, adding that the killings once again put the focus on the need to address discrimination, including racial disparities in law enforcement, in a comprehensive manner.

The UN chief extended his condolences to the families and colleagues of the victims, as well as the Police Department of Dallas, according to the spokesperson.

For its part, the Working Group stated that excessive use of force by the police against African-Americans in the US is a “regular” occurrence, with African-Americans reportedly shot at more than twice the rate of white people.

The Working Group is monitoring the situation and has repeatedly expressed its concern to the US Government about police killings of African-Americans and called for justice, and is convinced that the root of the problem lies in the lack of accountability for perpetrators of such killings despite the evidence.

“The killings also demonstrate a high level of structural and institutional racism. The United States is far from recognizing the same rights for all its citizens. Existing measures to address racist crimes motivated by prejudice are insufficient and have failed to stop the killings,” the human rights expert said. “It is time, now, for the US Government to strongly assert that Black lives matter and prevent any further killings as a matter of national priority.”

He also condemned yesterday's sniper attacks on police officers in downtown Dallas during a protest over the killings of African-American men in other cities, calling for the perpetrators to be held accountable.

According to media reports, at least one sniper killed five officers and wounded seven others at the rally on Thursday night. The sniper was killed, and three other people are in custody.

Independent experts are appointed by the Geneva-based UN Human Rights Council to examine and report back on a country situation or a specific human rights theme. They serve in their personal capacity and are not UN staff, nor are they paid for their work. 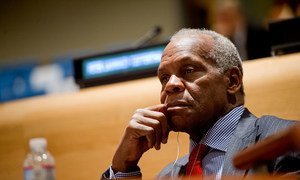 The international community must increase its commitment to fighting Afrophobia and discrimination against people of African descent, United Nations Children’s Fund (UNICEF) Goodwill Ambassador and actor Danny Glover has said, speaking during the International Decade for People of African Descent.