UNHCR/Markel Redondo
This man together with his wife and four daughters escaped increasing gang violence from El Salvador. They have been recognized as refugees in Mexico but they had problems to find work and to be accepted by the local community.
8 July 2016

With people fleeing violence in Central America in numbers not seen in more than 30 years, representatives from Governments, international organizations and civil society gathered for a United Nations-backed event on the issue in San José, Costa Rica, and agreed to enhance access to asylum and increase regional responsibility-sharing.

“We are very encouraged by the open and frank spirit in which the discussions took place and hope that the various actions announced will have a direct positive impact on the people who are affected by displacement,” said Volker Turk, Assistant High Commissioner for Protection for the Office of the UN High Commissioner for Refugees (UNHCR), in his closing remarks to the high-level event, which wrapped up yesterday.

Co-chaired by UNHCR and the Organization of American States (OAS), the two-day gathering was the first international event to focus on current forced displacement in the region and one of several key events leading up to the UN General Assembly’s summit on addressing large movements of refugees and migrants in September.

The number of people fleeing violence in El Salvador, Guatemala and Honduras, a region known as the Northern Triangle of Central America, has surged to levels not seen since armed conflicts wracked the region in the 1980s, according to UNHCR.

In 2015, asylum-seekers from this region topped nearly 110,000 – a more than five-fold increase over three years – with most of them seeking safety in Mexico and the United States, as well as Belize, Costa Rica, Nicaragua and Panama.

A set of actions agreed on at the event included: ensuring access to territory and asylum and enhancing arrangements for the reception of asylum-seekers and refugees; strengthening opportunities for self-reliance and local integration of refugees, including through investments of development funding; and enhancing regional cooperation and partnership through increased responsibility-sharing, including increased engagement by civil society organizations.

Among the displaced population from the region, the protection needs of unaccompanied or separated children, women, lesbian, gay, bisexual, transgender, and intersex communities, indigenous people and Afro-descendants, as well as individuals with disabilities, are most acute.

Opening the event on Wednesday, the UN High Commissioner for Refugees, Mr. Filippo Grandi, stressed the importance of embracing “regional responsibility-sharing mechanisms, with concrete actions in countries of origin, transit and asylum to resolve compelling protection and solutions needs.” 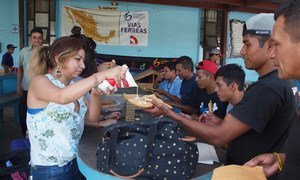 The number of people fleeing violence in Central America has surged to levels not seen since the region was wracked by armed conflicts in the 1980s, the UN refugee agency warned today, urging action to ensure that unaccompanied children and others receive the protection which they are entitled to.