UNICEF/UN022074/Ayene
At the Gedebe Health Post in Halaba Special Woreda (district) in SNNP Region of Ethiopia, 28-month-old Nebila has her mid-upper-arm circumference measured by a health worker. She was diagnosed with severe acute malnutrition and has been receiving treatment including ready-to-use-therapeutic food (RUTF).
8 July 2016

While the 2015-2016 El Niño – one of the strongest on record – has ended, its devastating impact on children is worsening, as hunger, malnutrition and disease continue to increase following the severe droughts and floods spawned by the event, a new report from the United Nations Children's Fund (UNICEF) revealed today.

Making matters worse, there is a strong chance La Niña – El Niño's flip side – could strike at some stage this year, further exacerbating a severe humanitarian crisis that is affecting millions of children in some of the most vulnerable communities, UNICEF said in a report It's not over – El Niño's impact on children.

El Niño is the term used to describe the warming of the central to eastern tropical Pacific that occurs, on average, every three to seven years. It raises sea surface temperatures and impacts weather systems around the globe so that some places receive more rain while others receive none at all, often in a reversal of their usual weather pattern.While El Niño, and its counterpart La Niña, occur cyclically, in recent years, mainly due to the effects of global climate change, extreme weather events associated with these phenomena – such as droughts and floods – have increased in frequency and severity, according to UN agencies.

“Millions of children and their communities need support in order to survive. They need help to prepare for the eventuality La Niña will exacerbate the humanitarian crisis. And they need help to step up disaster risk reduction and adaptation to climate change, which is causing more intense and more frequent extreme weather events,” said UNICEF's Director of Emergency Programs, Afshan Khan.

Indeed, the agency reports that children in the worst affected areas are going hungry. In Eastern and Southern Africa – the worst hit regions – some 26.5 million children need support, including more than one million who need treatment for severe acute malnutrition.

“The same children who are affected by El Niño and threatened by La Niña, find themselves on the frontlines of climate change,” added Ms. Khan.

Children in the worst affected areas are going hungry now, the report says and warns that their futures are at risk, as the extreme weather has disrupted schooling, increased disease and malnutrition, and robbed families of their livelihoods. In drought-affected areas, some children are staying away from class to fetch water over long distances, or have moved away with their families following loss of crops or livestock.

El Niño exacerbated drought across Eastern Africa after a series of climatic shocks in 2014 and 2015 had already ruined harvests and depleted water sources, leaving many children dependent on food aid to survive. Graphic: UNICEF

Moreover, being out of school often increases a child's risk of abuse, exploitation and, in some areas, child marriage. Malnutrition among children under five has increased alarmingly in many of the affected areas, as families who were already living hand-to-mouth. Undernutrition at a young age can have long-lasting effects, including increased risk of illness, delayed mental development or premature death, and can be passed on to the next generation. Undernourished girls have a greater likelihood of becoming undernourished mothers, who are more likely to give birth to low birthweight babies.

In many countries, already strained resources, have reached their limits, and affected families have exhausted their coping mechanisms – such as selling off assets and skipping meals. Unless more aid is forthcoming, including urgent nutritional support for young children, decades of development progress could be eroded.

A child is weighed at a UNICEF-supported therapeutic feeding centre at the Balaka district hospital in Malawi. The 2015-2016 El Niño’s devastating impact on children is worsening, as hunger, malnutrition and disease continue to increase following the severe droughts and floods spawned by the event. Photo: UNICEF/Sebastian Rich

In many countries, El Niño affects access to safe water, and has been linked to increases in diseases such as dengue fever, diarrhoea and cholera, which are major killers of children. According to UNICEF, in South America, and particularly Brazil, El Niño has created favourable breeding conditions for the mosquito that can transmit Zika, dengue, yellow fever and chikungunya. If La Niña does develop, it could contribute to the spread of the Zika virus to areas that have not been affected to date.

UNICEF also said there are serious concerns that Southern Africa, the global epicentre of the AIDS pandemic, could see an increased transmission of HIV as a result of El Niño's impact. Lack of food affects access to anti-retroviral therapy, as patients tend not to take treatment on an empty stomach, and many people will use their limited resources for food rather than transport to a health facility.

Drought can also force adolescent girls and women to engage in transactional sex to survive. And, mortality for children living with HIV is two to six times higher for those who are severely malnourished than for those who are not, reports UNICEF.

“The monster El Niño of 2015- 2016 has clearly demonstrated the need to step up emergency preparedness, disaster risk reduction and climate change adaptation efforts at a time when climate change is spurring increasingly severe and frequent extreme-weather events,” says the report, stressing that children's futures, and their very survival, depend on action taken today. “The humanitarian crisis will only grow if the world fails to act now,” it adds. 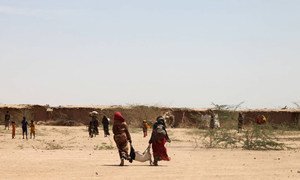