UN/MINUSTAH/Logan Abassi
Government of Haiti has launched a vaccination campaign against cholera that aims to reach 400,000 people in 2016.
5 July 2016

The World Health Organization (WHO) Representative for Haiti, Jean-Luc Poncelet, today stressed that vaccines along with water chlorination programmes, and longer-term efforts to improve water and the overall health system are vital to fight the prevalence of cholera in the country.

“The health system is very weak […] so we must use every single tool to ensure that cholera is reduced further in this country,” said Mr. Poncelet in an interview with the United Nations News Service.”

So far this year, a total of 118,000 persons have already been vaccinated and the Government, with UN support, now seeks to vaccinate another 750,000 persons in 2016-2017, which would allow WHO to reach some 868,000 people with vaccinations in the period, in so far as funding and vaccines are available. “With 1.5 million doses, it is the first time that such a programme will be undertaken,” he added.

Mr. Poncelet said that the vaccine, developed about five years ago and having an efficacy of 65 per cent, has been well-received by the local population. He added that it is important to understand that merely by the application of the vaccine, cholera will not be eliminated. “[Nonetheless] it will be a strong contributor to it,” he stressed.

Recalling a meeting of health experts in Haiti in April 2016, he underlined that it is very important that people, especially those receiving the vaccine, have access to chlorinated drinking water.

“By applying this [two-pronged] approach – water chlorination and vaccines – the number of cases in the department can be reduced,” said Mr. Poncelet.

Emphasizing the importance of sustained funding, he said that due to new “hot-spots” such as Syria and Sudan, as well as a level of “donor fatigue,” funds are declining for programmes in Haiti.

He further expressed hope that with the new strategies, use of new tools and building on the experience WHO has gained in Haiti and in other countries, new cases of cholera will be reduced. 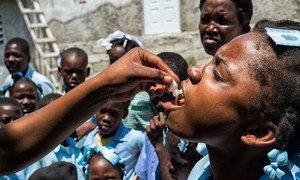 While the incidence of cholera in Haiti has decreased by 90 per cent since an outbreak that began shortly after the devastating earthquake of 2010, more investment is needed in the country’s health-care system to fully eliminate the disease and address the country’s other health challenges, a top United Nations official today said.