A United Nations human rights expert today deplored the wave of ageist attacks in the wake of the United Kingdom’s referendum to leave the European Union, including calls for age ceilings for the exercise of the right to vote.

“We have seen a number of European national newspapers and social media outlets stigmatizing older persons as the scapegoats for Brexit and calling for restrictions on ‘grey’ votes,” said Rosa Kornfeld-Matte, the UN independent expert on the enjoyment of all human rights by older persons. “General exclusions of the exercise of certain rights based on age are unacceptable under international human rights law,” she stressed.

The decision to leave the EU reportedly received strong support from voters over the age of 65.

“One magazine even suggested that the pensioners’ right to vote should be taken away, just as their driver’s licenses are, after they reach certain age,” she said.

Ms. Kornfeld-Matte warned that age-based discrimination may also be incorporated in laws and policies, such as those on job recruitment or legal capacity to exercise their rights.

“Old age should not be misused to challenge a person’s political competence. The full respect of the equal right of all individuals in public life and decision-making is fundamental to a democratic society,” she stated.

“As societies worldwide are ageing, there is a need to invest more to build intergenerational solidarity and foster societies’ understanding of the valuable contribution of older persons,” Ms. Kornfeld-Matte concluded. 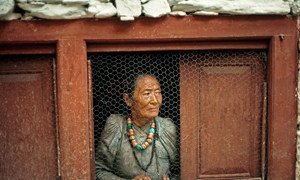 On World Day, Ban calls for ending elder abuse as a pathway towards Global Goals

Marking World Elder Abuse Awareness Day, United Nations Secretary-General Ban Ki-moon today emphasized that ending neglect, abuse and violence against older people is crucial as the international community continues to work together towards achieving the 17 Sustainable Development Goals and fulfil their underlying pledge to leave no one behind.