The United Nations humanitarian coordinator for Syria has expressed alarm over reports of deteriorating humanitarian conditions and urgent medical evacuation needs in the towns of Madaya, Foah, Zabadani and Kefraya, where more than 62,000 people are besieged.

In a statement, Yacoub El Hillo, the UN Resident and Humanitarian Coordinator for Syria, called for the parties to the “Four Towns Agreement” to allow for immediate and unconditional access for humanitarian actors.

“While parties to the agreement had committed to ensure humanitarian assistance to civilians trapped in the Four Towns, we have not been able to do so since April,” said Mr. El Hillo.

“We all remember too well the disturbing images of starving children in Madaya earlier this year, many of whom have died even after aid was finally allowed in. We are calling on all parties involved to ensure this doesn’t happen again. Immediate and unconditional humanitarian deliveries to the four towns must take place now,” he added.

Despite approval granted in May and June by the Syrian Government for the UN and humanitarian partners to provide assistance to besieged civilians in the four towns, access has not been possible because of tension among parties to the agreement, aerial bombardment in Idleb, and shelling on Foah and Kefraya, the Humanitarian Coordinator said.

Yesterday, the Government of Syria authorized “yet again” the delivery of humanitarian assistance to the four towns under the July plan, allowing the UN and partners a “unique opportunity” to reach besieged people with aid during the upcoming holy days of Eid al-Fitr, Mr. El Hillo said.

The Humanitarian Coordinator emphasized that the UN is equally concerned over the delays in conducting urgent medical evacuations from the four towns.

“Our teams stand ready to proceed with the medical evacuation of the sick and wounded. We ask the parties to let us help the most vulnerable, and put an end to the tit-for-tat approach of the agreement that does not allow for emergency life-saving responses when urgently needed,” he said.

Across Syria, about 5.5 million people are in need in hard-to-reach and besieged areas with limited access to basic life-saving assistance and protection. Of that number, close to 600,000

are in 18 besieged areas including the four towns.

“The United Nations is once again calling for the immediate lifting of all sieges of civilians in Syria. Using besiegement that results in starvation as a method of warfare is a crime under International Humanitarian Law,” Mr. El Hillo emphasized.

Meanwhile, on Sunday, a follow-up convoy to besieged East Harasta went ahead with food, medicines and other essentials for 10,000 people. This area was last reached by a UN inter-agency convoy on 18 May, the office of the spokesperson for Secretary-General Ban Ki-moon noted in a statement briefing. 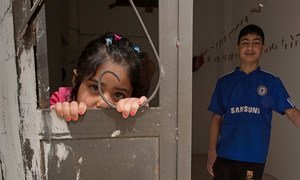 UN and partners warn of growing poverty for Syrian refugees

While significant progress has been made in providing assistance, the number of Syrian refugees living in poverty continues to rise in host countries in the region and access to basic services remains a critical challenge, a new United Nations report warned today.