Estimates rose significantly in June, as updated reports from the Ethiopia’s National Flood Task Force show that close to 690,000 people are now likely be affected, with over 320,000 estimated to be displaced, said the agency in a report.

“These predictions may rise even further as these heavy rains come on the cusp of what some meteorological experts predict will be a significant La Niña episode – usually accompanied by heavy rainfall – starting as early as September 2016,” added FAO.

Particularly affected are the livestock-dependent households, as well over 55,000 hectares of land, much of it pasture, has been flooded, and thousands of livestock have died due to flash floods and landslides, brought on by the long-awaited belg or spring season rains, in regions such as Somali, SNNPR (Southern Nations, Nationalities, and Peoples' Region), Oromia, Amhara and Afar.

“Animal health is particularly at risk, and livestock experts have highlighted the crucial role of emergency on-the-ground health provisions such as vaccinations and treatments to prevent or mitigate the spread of disease in affected areas,” noted FAO.

The UN agency has appealed for $3 million to continue animal health campaigns into September 2016 as compounded impact of both the El Niño-induced drought and the recent floods have eroded coping mechanisms among households.

FAO estimates that households that lost small ruminants may need at least two years to return to pre-drought levels, while cattle-owning households may require double the recovery time.

It also noted that low animal body conditions also resulted in diminished terms of trade. In Somali Region, animals previously bartered for two bags of grain were routinely sold for only one at the height of the crisis. Milk production is slowly rising, after falling dramatically in drought-prone and livestock-dependent regions such as Afar and Somali.

Above-normal levels of migration in search of pasture and water were also recorded.

Access to water for livestock through the rehabilitation of water points, many of which were severely affected by the drought has remained a priority for the UN agency.

The agency has also appealed for additional $2 million to rehabilitate water points and improve the drought resilience of communities.

FAO is also supporting the smallholder use of fast-growing forage planting seeds and materials, enhancing the nutrition and food security of more than 7,600 of the worst-affected households.

The UN agency further said that aims to reach around 1.8 million vulnerable pastoralists, agro-pastoralists and small farmers in 2016. An estimated 654,000 households still require livestock interventions. Its total appeal for the livestock sector is $7.8 million.

The agency’s total El Niño appeal of $50 million is currently 24 per cent funded, approximately $12 million has been raised so far. 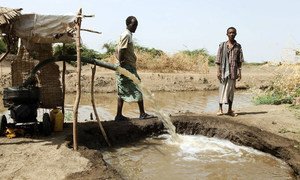 The United Nations Food and Agriculture Organization (FAO) today announced that timely agricultural assistance for the upcoming rainy season is essential to help the drought-affected people of Ethiopia, as one of the strongest El Niño events on record continues to have devastating effects on the lives and livelihoods of farmers and herders.