UN and partners warn of growing poverty for Syrian refugees

While significant progress has been made in providing assistance, the number of Syrian refugees living in poverty continues to rise in host countries in the region and access to basic services remains a critical challenge, a new United Nations report warned today.

The mid-year report of the 2016 Regional Refugee and Resilience Plan, released by the Office of the UN High Commissioner for Refugees (UNHCR) and more than 200 international and national actors, examines progress this year in helping refugees and host communities in Turkey, Jordan, Iraq, Lebanon and Egypt.

With the Syria conflict entering its sixth year, host governments and communities continue to bear a heavy political, economic, social and security burden. Public institutions are under extreme pressure to deliver basic services to an increasingly large number of vulnerable people, testing the limits of existing infrastructure.

The report finds that with the generous support of donors, partners in the Plan have in 2016 delivered cash assistance to 102,853 households, food to 2,035,767 individuals, 1,090,795 primary health care consultations, shelter assistance to 25,148 households and other forms of emergency assistance to refugees and host populations. Support was provided to 5,603 people to find employment.

A key aim of the Plan is to invest in national services and systems in the host countries, which are under increased strain, and partners report that almost 200 education and health facilities were supported.

There was also promising news in the livelihoods sector, with work permits issued by Jordan to Syrians and a new regulation allowing Syrian refugee access to employment in Turkey. These positive initiatives, supported at February’s London Conference on Syria, need to be matched by the international community with continuing generous funding and responsibility sharing.

Refugees living under the poverty line

Despite this progress, the report warns of growing poverty. It says that in Lebanon, the average debt held by refugee households has increased over the first quarter of 2016 and the number of people living below the poverty line has risen to 70 per cent compared to 50 per cent in 2014. 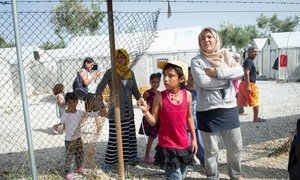 United Nations Secretary-General Ban Ki-moon has urged European leaders meeting in Brussels today to act with “compassion and foresight,” and find humane solutions for refugees that not only uphold international law and protect human rights, but also save lives.