The United Nations General Assembly today adopted a resolution on the UN Global Counter Terrorism Strategy, with the aim of security peace and prosperity for succeeding generations.

The 15-page resolution, adopted by consensus, “calls upon Member States, the United Nations and other appropriate international, regional and subregional organizations to step up their efforts” to implement, in an integrated and balanced manner, the UN Global Counter-Terrorism Strategy, an instrument adopted by the Assembly in 2006 to enhance national, regional and international efforts to counter terrorism.

The text also “reiterates its strong and unequivocal condemnation of terrorism in all its forms and manifestations, committed by whomever, wherever and for whatever purposes.”

The Assembly reviews the Strategy every two years, and the adoption of a new resolution came on the second and last day of the fifth review held at UN Headquarters in New York, on the tenth anniversary of the Strategy.

In a statement from his spokesperson, Secretary-General Ban Ki-moon has welcomed the move.

“The adoption by consensus of this resolution symbolizes the international community's strong resolve to act in unison and without delay to address terrorism and violent extremism,” the UN chief said through his spokesman.

“Terrorism and violent extremism pose a major threat to international peace and security, as well as to sustainable development, human rights and humanitarian action at the global, regional and national levels.”

The Secretary-General is also pleased that the 193-nation Assembly has welcomed his initiative to present a Plan of Action to Prevent Violent Extremism, and that it has recommended that Member States consider the implementation of relevant recommendations in the Plan, the spokesman said. 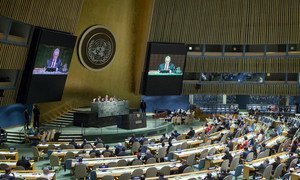 The unprecedented levels of terrorism and violent extremism on a global scale requires balanced implementation of commitments made through collective action, Secretary-General Ban Ki-moon today emphasized, calling on the international community to act with unity and resolve to address “this major scourge of our time.”