At conference, Ban urges ‘political will’ for two-State solution for Israel and Palestine

Following a two-day visit to Israel and Palestine, United Nations Secretary-General Ban Ki-moon today emphasized that what is lacking in terms of a lasting settlement for peace to the conflict is the political will to make that happen.

“During my trip, I reminded the leadership on both sides of the imperative of taking prompt action to restore hope in a peaceful future and to preserve the two-State solution – the only way to meet the national aspirations of both peoples,” the Secretary-General said in a message to the International Conference in Support of Israeli-Palestinian Peace taking place in Geneva today and tomorrow.

In his message, which was delivered by Michael Moeller, Director-General of the UN Office at Geneva (UNOG), Mr. Ban noted that the title of the conference – Peace is possible – frameworks for a way forward is apt, as no one should give up hope of negotiating a settlement between Israel and Palestine.

“All that is lacking is the political will to make that happen,” he stressed.

The Secretary-General pointed to the expansion of Israel’s settlement enterprise in the West Bank, including East Jerusalem, as a factor that undermines trust and constitutes a significant threat to a viable Palestinian State. For its part, Palestinian leadership must live up to its responsibility to speak clearly and act firmly against violence and incitement, the Secretary-General said.

“The United Nations remains committed to supporting a negotiated, just, comprehensive and enduring two-State resolution for the people of Israel and Palestine,” Mr. Ban said, adding that he will personally commit to working with their leaders and the international community to advance their essential goals, until the last day of his tenure as Secretary-General.

The conference, which is being convened by the UN Palestinian Rights Committee, brings together experienced peace negotiators, international experts including from the UN, Israel and Palestine, civil society and academics, to discuss lessons learned from past initiatives related to the Israeli-Palestinian peace process and assess recent initiatives by key actors. 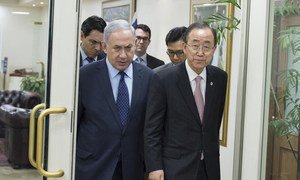 Following a meeting this morning in Jerusalem with Israeli Prime Minister Benjamin Netanyahu, United Nations Secretary-General Ban Ki-moon urged the leader to take the “courageous steps” necessary for a negotiated two-State solution in order to bring lasting peace, security and dignity for the people of both Israel and Palestine.