OCHA/Vicky Prekabo
Operations Director of the Office of the Coordination of Humanitarian Affairs (OCHA), John Ging (centre), walks around the Kanaba IDP site in the Democratic Republic of the Congo (DRC) during a visit on 24 June 2016.
29 June 2016

Following a visit to Angola and the Democratic Republic of the Congo (DRC), a senior United Nations humanitarian official today called on the international community to pay more attention to the dire needs of its residents.

“These two countries are most definitely not in the political and funding spotlight in the way they need to be,” John Ging, Operations Director of the Office of the Coordination of Humanitarian Affairs (OCHA), told journalists at the UN Headquarters in New York.

In the DRC, the humanitarian community has appealed for $690 million for this year, which is only 22 per cent funded, he added. Without additional funding, the capacity of aid organizations to operate will be hampered.

In addition, about half of the population lacks access to safe drinking water on a regular basis, which means greater exposure to water-borne diseases, such as cholera. While about 4.5 million people are food insecure, with about half of all children under the age of five malnourished.

Insecurity is another key concern in the country, for the 12.4 million people living in conflict-affected areas, and for the aid workers trying to assist them. The DRC has one of the highest numbers of security incidents against aid workers in the world.

Despite these challenges, there is a heightened sense of responsibility for ownership on the part of Government and local authorities, Mr. Ging said.

In Angola, 1.4 million people have been directly affected by El Niño, Mr. Ging said, adding that malnutrition is going up at an alarming rate.

On the yellow fever outbreak, the country is struggling to get the disease under control due to the limited vaccination coverage, he said. “This is a disease that should not affect anyone in 2016 because there is vaccination,” he said.

The World Health Organization (WHO) and Angola’s Ministry of Health are conducting a campaign to vaccinate 19 million people, but only 12.7 million doses are available, he said. The yellow fever can be transmitted by mosquitos, he said, noting that China reported cases from some migrant workers who returned home.

The country also needs help as it is dealing with El Niño effect, yellow fever and the falling prices of oil, whose export accounts for a large portion of the country’s income, he said. 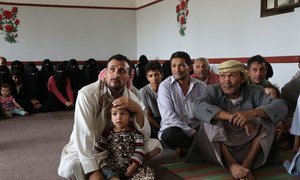