FAO/Honduras
By assisting with projects such as this storage system for irrigation water, FAO is supporting the countries of the Dry Corridor in Central America in addressing disaster risks that affect agriculture and food and nutrition.

28 June 2016
With the El Niño climate event devastating Central America’s so-called Dry Corridor, where one of the worst droughts in decades has left 3.5 million people food insecure, United Nations agencies will gather this week to discuss ways to improve the long-term response to the weather developments in the region.

In a news release, the Food and Agricultural Organization (FAO) said it will convene a high-level meeting in Rome on 30 June, along with the International Fund for Agricultural Development (IFAD) and the World Food Programme (WFP), “to focus on the urgent need for long-term action to address the impact of El Niño, including building resilience for food security and nutrition for the most vulnerable populations in the affected countries.”

“The aim of the high-level meeting is to increase awareness of, and the response to, this protracted and recurrent crisis, and to mobilize the international community to support the efforts of governments, UN agencies and other partners,” FAO added.

While El Niño, and its counterpart La Niña, occur cyclically, in recent years, mainly due to the effects of global climate change, extreme weather events associated with these phenomena – such as droughts and floods – have increased in frequency and severity, FAO noted.

In El Salvador, Guatemala and Honduras, the most affected countries, approximately 2.8 million people are dependent on food aid, according to the UN agency, which also flagged that that the situation is putting at risk the livelihoods of millions of small-scale family farmers in the Dry Corridor, many of whom are heavily dependent on subsistence agriculture.

The term Dry Corridor defines a group of ecosystems in the eco-region of dry tropical forests in Central America covering the lowlands of the Pacific coastal area, and most of central pre-mountain region of El Salvador, Guatemala, Honduras, Nicaragua, and parts of Costa Rica and Panama. Climate risks in the Dry Corridor are mainly represented by recurrent droughts, excessive rains and severe flooding affecting agricultural production, with greater intensity in degraded areas. 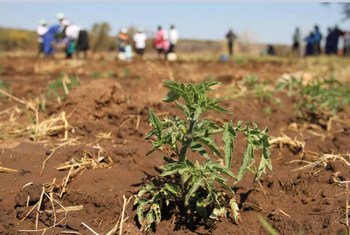 22 June 2016
Climate change is expected to increase the intensity and frequency of droughts in the Caribbean, so countries in the region must enhance their capabilities to deal with this and other extreme weather-related challenges to ensure food security and hunger eradication, the United Nations Food and Agriculture Organization (FAO) has said in a new report.