In an interview with the UN News Centre, General Assembly President Mogens Lykketoft – who has spearheaded efforts at the Organization to make the election process for the next Secretary-General more transparent – explained that the elections for the non-permanent seats on the Council, which were previously held in October, were moved to June under Assembly resolution 68/307 (2014) so that elected Member States can have more time to prepare for their terms before assuming their responsibilities.

“It is one of the revitalization resolutions worked out in the General Assembly, where it was found more reasonable that countries knew very much beforehand if they were to be members of the Security Council,” Mr. Lykketoft said.

“It is to get countries better prepared to organize their participation. It takes a lot of work and a lot of staff, I think, for the individual countries being elected to the Security Council, so they get more time to organize it,” he added.
UN Photo/Amanda Voisard
Mogens Lykketoft (right), President of the seventieth session of the General Assembly, presides over a meeting at Assembly at the UN Headquarters, in Ne York. At his side is Secretary-General Ban Ki-moon. (file)

How to get a non-permanent seat on the Council

Under an amendment to the UN Charter that went into effect in 1965, the General Assembly increased the number of non-permanent members in the Security Council from 6 to 10, with five new members elected for a two-year period every year. This brought the membership of Security Council, the primary UN body tasked with the maintenance of international peace and security matters, to 10 non-permanent members, who sit alongside the five permanent, veto-wielding members: China, France, Russia, the United Kingdom and the United States.

The non-permanent seats are allocated according to a rotation pattern set by the Assembly back in 1963, to ensure a proportionate representation over time from the different parts of the world: five from African and Asian States; one from Eastern European States; two from Latin American States; and two from Western European and Other States.

“We have these five different geographic formations in the United Nations. Some of them can seem a little old-fashioned and odd for people,” said the General Assembly President, noting that, for instance, Cyprus remains a member of the Asia-Pacific Group although it is a member of the European Union.

“We have a division between the Western European and the Others. The Others are United States, Canada, Australia, New Zealand and Israel – but it is the traditional divide during the Cold War that defines the Western European members of this group. While in the Eastern European group, we have, of course, Russia, you have countries like Armenia, Ukraine, Belarus, and then we have, nowadays, 12 members of the European Union and NATO. So the historic configuration can seem somewhat awkward, but that’s how it works,” he explained.

More and more countries are announcing their candidacy for the Security Council earlier. It’s one of the most prestigious and influential places to be in for Member States, and you have seen, for instance, already for the selection four years from now candidates have come forward – Assembly President Lykketoft

However, the seat for the Asia-Pacific Group – currently held by Malaysia – is being contested this year, with two Member States – Kazakhstan and Thailand – presenting their candidacies.

Italy, the Netherlands and Sweden are competing for two seats under the Western European and Others Group – which are currently held by New Zealand and Spain. With the exception of Kazakhstan, all competing candidate countries have served on the Council in the past.

The new membership will join the five other non-permanent members of the Council whose terms expire at the end of 2017: Egypt, Japan, Senegal, Ukraine and Uruguay.

The voting process in the General Assembly

To secure a non-permanent seat on the Council, a candidate country must garner the votes of two-thirds of the Member States present at the General Assembly session. If all 193 UN Member States are present tomorrow, this means winning a seat will require 129 positive votes.

If no candidate country obtains the required number of votes in the first round, voting in the following round will be restricted to the candidates that received the most votes. Under this restricted ballot, the number of countries included on the ballot is limited to twice the number of available seats for a particular group.

Historically, extended rounds of voting to fill a contested seat have taken place on several occasions. Another possible outcome in situations of extended voting is that one of the contenders withdraws, or a compromise candidate might be elected instead.

As Mr. Lykketoft explained that, in 1979, there were 155 votes between Cuba and Colombia over a non-permanent seat on the Council, and in the end, Mexico was elected as the compromise candidate.

“And we had, back in 1956, 52 rounds between Poland and Turkey, and that was solved in another way. They divided the two-year period between them, and got that accepted in the General Assembly,” Mr. Lykketoft said.

“Then we had in 2008, 48 rounds between Guatemala and Venezuela that ended up with Panama being the compromise candidate. And we had in 2011, 17 rounds of voting before Azerbaijan, who was in front of Slovenia, got the needed two-thirds majority,” he added.

In addition to the change in election month this year, candidate countries have begun to announce their candidacies for a non-permanent seat on the Council earlier than ever before.

“More and more countries are announcing their candidacy for the Security Council earlier. It’s one of the most prestigious and influential places to be in for Member States, and you have seen, for instance, already for the selection four years from now candidates have come forward,” Mr. Lykketoft said.

Processes are changing gradually, and this demand from Member States and from the general public, for more transparency in the deliberations, both in the Council and the Assembly, has an impact, and changes gradually the way we are working– Assembly President Lykketoft  ​​​​​​​

In one of the latest examples, Canadian Prime Minister Justin Trudeau in March announced Canada’s bid for elections in 2020.

Also for the first time this year, and in the context of momentum for accountability and transparency in the selection process of the new Secretary-General, candidate countries to the Council participated in two election debates at UN Headquarters in New York.

The events – held on 23 and 24 May – consisted of two debates with the five competing candidates of the Asia-Pacific Group and Western European and Others Group, organized by the World Federation of UN Associations.

“There is an ongoing discussion both in the General Assembly and in the Security Council about working methods, in order get more well-organized and more productive in the outcome, and that will hopefully be even more fruitful in the current Security Council,” Mr. Lykketoft said.

“Processes are changing gradually, and this demand from Member States and from the general public, for more transparency in the deliberations, both in the Council and the Assembly, has an impact, and changes gradually the way we are working,” he added.

The elections for the non-permanent members to the Security Council are scheduled to take place at 10 a.m. tomorrow in the General Assembly Hall at UN Headquarters in New York. 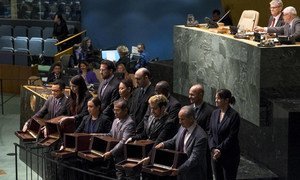 In one round of voting the United Nations General Assembly today elected Egypt, Japan, Senegal, Ukraine and Uruguay to serve as non-permanent members on the Security Council for two-year terms beginning on 1 January 2016.