UN Photo/Rick Bajornas
A wide view of the conference room as Deputy Secretary-General Jan Eliasson (shown on screens) delivers opening remarks at the Fortieth Annual Conference of the Centre for Oceans Law and Policy.
27 June 2016

Addressing a gathering on laws affecting the world’s oceans, the United Nations Deputy Secretary-General Jan Eliasson today underscored that healthy oceans are critical to maintaining life on the planet, while also noting their connection to broader sustainable development aims.

In his remarks to the opening of the 40th annual Conference of the Centre for Oceans Law and Policy, the UN official also emphasized that oceans are fundamental to meeting many of the world’s most pressing challenges, such as fighting hunger, providing clean energy and countering climate change.

“They regulate the climate and provide an incredible range of natural resources, nutritious food, and jobs that benefit billions of people,” he said, while cautioning that humans’ impact on oceans and seas is taking a heavy toll. “Many marine species are at serious risk from ocean warming and over-fishing.”

Mr. Eliasson drew attention to the threats posed by rising sea levels to small island nations, which “bear so little responsibility for climate change but are on the frontlines of its imprint on their nations and people.”

The Conference, organized in cooperation with the UN Office of Legal Affairs, focuses on the legal order for the world’s oceans and the regime under the UN Convention on the Law of the Sea.

It is also the first annual conference since the adoption of the 2030 Agenda for Sustainable Development and the Paris Agreement.

A close-up of a conference document during the Fortieth Annual Conference of the Centre for Oceans Law and Policy. UN Photo/Rick Bajornas

Noting the importance of oceans in the 2030 Agenda, as reflected in the 14th Sustainable Development Goal (SDG), which focuses on the conservation and sustainable use of oceans, seas and marine resources, Mr. Eliasson asked everyone present to reflect on the intersections between the rule of law and the SDGs.

He also welcomed the international conference to be held in Fiji in June 2017 on oceans and SDG 14.

The Deputy Secretary-General further noted the importance of rule of law in sustainable development and said that “the right balance” must be struck between rights and responsibilities. He said while taking benefits from natural resources, they should also be taken care of so that these resources can provide for the future generations. 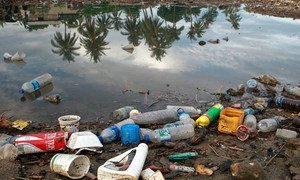