23 June 2016
The number of people suffering from drug use disorders has increased disproportionally for the first time in six years in 2014, while the number of people who used at least one drug stayed at five per cent of the adult population, according to the annual report prepared by the United Nations.

The World Drug Report 2016, which examines the health impact of using opiates, cocaine, cannabis, amphetamine-type stimulants (ATS) and new psychoactive substances (NPS), was released today by the UN Office on Drugs and Crime (UNODC), ahead of the International Day Against Drug Abuse and Illicit Trafficking on 26 June.

It also came in the wake of the UN General Assembly Special Session on the World Drug Problem (UNGASS), held in April, which resulted in a series of concrete operational recommendations and marked a landmark moment in global drug policy.

The report found nearly 250 million people between the ages of 15 and 64 used at least one drug in 2014. Although this figure has not grown over the past four years in proportion to the global population, the number of people classified as suffering from drug use disorders exceeded 29 million people, compared with 27 million in the previous report.

Additionally, around 12 million people inject drugs, with 14 per cent of these living with HIV. The overall impact of drug use in terms of health consequences continues to be devastating.

As UNODC Executive Director Yury Fedotov notes, it is critical that the international community come together to ensure the commitments adopted at the UNGASS are met – and the World Drug Report offers an important tool to assist with this task.

“By providing a comprehensive overview of major developments in drug markets, trafficking routes and the health impact of drug use, the 2016 World Drug Report highlights support for the comprehensive, balanced and integrated rights-based approaches as reflected in the outcome document which emerged from the UNGASS,” he said in a press release.

Drug use and its health consequences

While drug-related mortality has remained stable around the world, there were still around 207,000 deaths reported in 2014, an unacceptably high number of deaths which are preventable if adequate interventions are in place.

Heroin use – and related overdose deaths – appears to have increased sharply over the last two years in some countries in North America and Western and Central Europe. Underlining the significance of this, Mr. Fedotov noted that while the challenges posed by new psychoactive substances remain a serious concern, “heroin continues to be the drug that kills the most people and this resurgence must be addressed urgently.”

Cannabis, meanwhile, remains the most commonly used drug at the global level, with an estimated 183 million people having used it in 2014. By analysing trends over several years, the report shows that with changing social norms towards cannabis – predominantly in the west – cannabis use has climbed in parallel with higher acceptability towards the drug. In many regions, more people have entered treatment for cannabis use disorders over the past decade.

The report also includes new findings related to people who inject drugs. For example, the link between the use of stimulants (among them new psychoactive substances which are not under international control) and engaging in risky injecting and sexual behaviours which can result in a higher risk of HIV infection, is examined.

Additional findings point to high levels of drug use in prison, including the use of opiates and injecting drug use. Prisons therefore remain a high-risk environment for infectious diseases, and the prevalence of HIV, hepatitis and tuberculosis among persons held in prison can be substantially higher than among the general population. The risk from overdose continues to be high among ex-prisoners particularly shortly after their release from prison.

The report notes that men are three times more likely than women to use cannabis, cocaine or amphetamines, whereas women are more likely than men to engage in the non-medical use of opioids and tranquilizers. Gender disparities can be attributed to the opportunity of drug use in a social environment, rather than gender being a factor determining drug use.

Despite the fact that more men use drugs than women, the impact of drug use is greater on women than it is on men, because women tend to lack access to the continuum of care for drug use dependence. Within the family context, female partners and children of drug users are also more likely to be the victims of drug-related violence.

With 2016 marking the first year of the adoption of the new Sustainable Development Goals (SDGs), the report provides a special focus on these linkages. The SDGs have been divided in five broad areas: social development; economic development; environmental sustainability; peaceful, just and inclusive societies; and partnerships.

The report highlights a strong link between poverty and several aspects of the drug problem. Indeed, the brunt of the drug use problem is borne by people who are poor in relation to the societies in which they live, as can be seen in stark terms in wealthier countries. The strong association between social and economic disadvantage and drug use disorders can be seen when analysing different aspects of marginalization and social exclusion, such as unemployment and low levels of education.

In a video message to the UNODC Special Event in Geneva tyo launch the 2016 Report, Oh Joon, President of the UN Economic and Social Council (ECOSOC) said with the adoption of the 2030 Agenda for Sustainable Development, Member States had set an ambitious new framework with 17 Sustainable Development Goals. “We have shared responsibility in achieving these goals as well as in addressing the world drug problem,” he added.

Shared responsibility is a principle at the heart of the work of ECOSOC and its functional commissions, he said, explaining that that Commission on Narcotic Drugs plays an important role in this context. Under the auspices of ECOSOC, the 2016 session of the High-Level Political Forum (HLPF) will be held in July to review the implementation of the 2030 Agenda.

“The forum will fully assume its central role in overseeing a network of review and follow-up processes at the global level. The theme of the 2016 session is ‘Ensuring that no one is left behind,” said Mr. Oh, noting that he has invited all ECOSOC functional commissions to contribute to the HLPF, showcasing their diverse contributions to the 2030 Agenda.

For its part, the Commission on Narcotic Drugs has long taken a broad development approach to address links between drug-related issues and sustainable development. As such, efforts to achieve the SDGs and effectively address the world drug problem are complementary and mutually reinforcing, he said.

World drug use on the rise – UN report

Narcotics supply and demand reduction strategies must work together, report at UN says 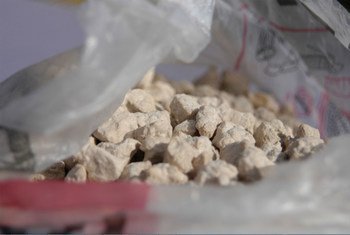 19 April 2016
The United Nations today adopted a new framework putting people at the centre of global policies on drug control, which the head of the UN Office on Drugs and Crime (UNODC) says can help promote the “urgent, united and concerted action we need.”