The United Nations Office for the Coordination of Humanitarian Affairs (OCHA) has released its 2015 annual report, articulating its response to the humanitarian challenges and human suffering, in all corners of the world that have overstretched the UN relief arm.

The report recalls the humanitarian response and the work undertaken by OCHA in five level-three emergencies in the Central African Republic, Iraq, South Sudan, Syria, and Yemen, as well as in two sudden onset natural disasters in Nepal and Vanuatu, many protracted crises, including the complex mixture of violence and environmental degradation in the Lake Chad Basin that continued to require intensive advocacy, coordination and resource mobilisation.

It also recaps the work undertaken in the wake of the 2015 El Niño, one of the most powerful to date and marked by severe droughts in parts of Central America, the Pacific, and Southern and Eastern Africa. The complex climate system contributed to devastating food insecurity, particularly in Ethiopia, Haiti, Malawi and Zimbabwe, catalyzing OCHA to mobilize funding and raise an alert.

The report further looks back at the work in preparation to the World Humanitarian Summit through regional and business consultations in Europe, Latin America, the Middle East and North Africa, the Pacific, and South and Central Asia. The consultations channelled the views of affected people, civil society and non-governmental organizations, Governments, UN agencies, academia, and analysts into the core responsibilities for action that will shape the Summit and humanitarian action for years to come.

OCHA also discusses the management and administration role in guiding and supporting the work on the ground, and on the support and contributions from donors as well as challenges brought on by some of the worst exchange rate and market fluctuations in recent years.

In his foreword to the report, Under-Secretary-General for Humanitarian Affairs and Emergency Relief Coordinator, Stephen O’ Brien applauded the efforts of OCHA staff and thanked them for their committed work at a time when the office is “grappling with unprecedented scales of need and some of the most pressing challenges facing humanity.” 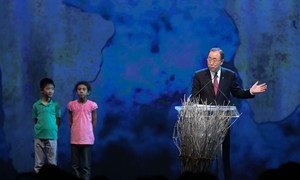