UN Photo/Mark Garten
A wide view of the Security Council as Ismail Ould Cheikh Ahmed, the Secretary General's Special Envoy for Yemen, briefs the Council via video teleconference on the humanitarian situation in Yemen.

21 June 2016
The United Nations–supported Yemeni peace talks under way in Kuwait have progressed “slowly, yet constructively,” over the last two months, with agreement still to be reached on the sequencing of the various steps proposed, including the timing of establishing a national unity government, the UN envoy for the country said today.

“In short, the general atmosphere continues to be positive although difficulties remain which need to be addressed,” Ismail Ould Cheikh Ahmed, UN Special Envoy for Yemen, told the Security Council via video link.

Over the previous period of the talks, the parties unanimously agreed on the necessity of reaching a peaceful solution to put an end to the conflict in Yemen, he noted. A number of prisoners and detainees, including children, have been released. The cessation of hostilities has allowed humanitarian aid to reach areas that were previously not accessible.

The participants have discussed the most delicate issues, including military withdrawals, security arrangements and the handover of weapons, sensitive political issues and ways to improve the economic and humanitarian situation, as well as the release of prisoners and detainees, he said.

After intense talks with both parties, the envoy has presented a roadmap outlining a practical plan to end the conflict in Yemen. It provides for implementation of the security arrangements specified in Security Council resolution 2216 (2015) and the establishment of a national unity government that would ensure the delivery of basic services and address the recovery of the Yemeni economy.

According to the proposed roadmap, the national unity government would also be responsible for preparing a political dialogue to define the remaining steps for a comprehensive political solution, including the electoral law, the mandate of the institutions, which would oversee the transition period and the completion of the draft constitution.

The delegations have responded positively to the proposals, but have not yet reached agreement on the sequencing of the different steps provided for in the roadmap. Questions need to be answered as to when the unity government would be created and what to do if particular provisions of the roadmap are implemented and others are not.

The cessation of hostilities declared on 10 April has continued to provide relief from violence in many parts of Yemen, but unfortunately, serious violations have occurred, such as the shelling of a popular market in Taiz on 4 June, which resulted in 18 civilian deaths and tens of injuries, he said. In addition, there were violations of the truce in Marib, al Jawf, Taiz and in the border areas with Saudi Arabia.

The failure to provide basic services over the last year has had a devastating impact, Mr. Ould Cheikh Ahmed noted. High temperatures and the lack of electricity in Aden, Hodayda and elsewhere have exacerbated the health crisis in these areas and caused a number of preventable deaths.

Since the beginning of 2016, Yemen’s gross domestic product (GDP) shrank by more than 30 per cent. To address this alarming situation, the Central Bank has continued to ensure the import of basic commodities such as rice, wheat and medicines.

Mr. Ould Cheikh Ahmed welcomed the release of prisoners that took place since the beginning of Ramadan, but tragically, that positive step had still been accompanied by continued and systematic persecution of civilians, including journalists and civil society activists in Yemen. These acts of intimidation and harassment are a clear violation of the international instruments on Human Rights, he said.

“Yemen is on the path to an agreement and each day of delay needlessly extends the country’s agony,” he said, stressing that the unwavering unity of this Council has been a key factor supporting progress in the talks. 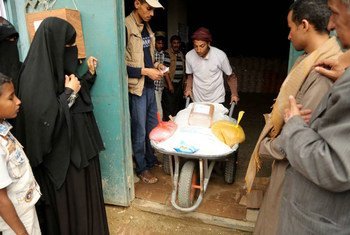 21 June 2016
Vast swathes of war-torn Yemen – 19 out of 22 governorates – are facing severe food insecurity, and the situation within affected areas is likely to deteriorate if conflict persists, according to a new assessment by the United Nations and partners.