Visiting the Greek island of Lesbos, which has become migrants' entry point to Europe, United Nations Secretary-General Ban Ki-moon today called on the countries in the region to respond with a humane and human rights-based approach, instead of border closures, barriers and bigotry.

“Today, I met refugees from some of the world's most troubled places. They have lived through a nightmare. And that nightmare is not over,” Mr. Ban told non-governmental organizations (NGOs), volunteers and media, who gathered to hear the UN chief's firsthand account of the situation there.

“But here in Lesbos, they have found relief from war and persecution,” he added, noting that the islanders opened their homes, hearts and wallets to support people in need.

Mr. Ban said that the refugee families shared their hopes with him: school for their children; jobs to provide for their families; and the opportunity to give back to their communities. They yearn to go home – but know that remains a distant dream.

Mr. Ban's two-day visit to Greece came just ahead of World Refugee Day on 20 June, and in the runup to the UN General Assembly's High-Level Meeting to address the large movements of refugees and migrants, on 19 September.

The UN is doing all it can to mobilize support, but across the region, refugee conditions are worsening, with many becoming destitute, girls being forced into early marriage, half of all refugee children out of school, many forced to beg on the streets, or becoming the victims of exploitation, including sexual abuse, he said.

Noting that every month, 450 people lose their lives in the Mediterranean, the equivalent of two full transcontinental passenger jets, Mr. Ban urged the international community to do more to resolve conflicts and address the factors causing so much suffering and upheaval, and called on the countries of Europe to respond with a humane and human rights-based approach.

“Detention is not the answer,” he said. “It should end immediately. Let us work together to resettle more people, provide legal pathways, and better integrate refugees. I recognize the difficulties. But the world has the wealth, the capacity and the duty to meet this challenge.”

Developing countries host 90 per cent of the world's refugees. It is time for the world to share fully in this responsibility, Mr. Ban stressed.

“That is our political and moral obligation. That is our humanitarian imperative. It is what we must do as a human family. One of the most beautiful words in the Greek lexicon is philoxenia -- friendship towards strangers,” he concluded.

Ahead of World Refugee Day, the Office of the UN High Commissioner for Refugees (UNHCR) has recently launched the #WithRefugees petition, which aims to gather public support for the growing number of families forced to flee conflict and persecution worldwide.

♦ Receive daily updates directly in your inbox - Subscribe here to a topic.
♦ Download the UN News app for your iOS or Android devices.
refugee|migrant 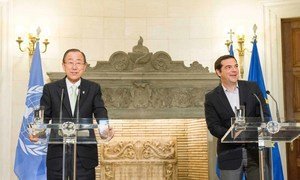 On a visit to Greece, United Nations Secretary-General Ban Ki-moon today discussed the refugee crisis with Prime Minister Alexis Tsipras, urging States to address the root causes of displacement and more evenly share the responsibility for the welfare of migrants and refugees.