On a visit to Greece, United Nations Secretary-General Ban Ki-moon today discussed the refugee crisis with Prime Minister Alexis Tsipras, urging States to address the root causes of displacement and more evenly share the responsibility for the welfare of migrants and refugees.

“The main topic of discussion at this time is of course the tremendous challenges you are facing in addressing the needs of so many desperate people fleeing war and persecution,” Mr. Ban said in a press conference held in the country's capital, Athens.

Mr. Ban's two-day visit to Greece came just ahead of the World Refugee Day on 20 June, and in the runup to UN General Assembly's High-Level Meeting to address the large movements of refugees and migrants on 19 September.

The UN chief acknowledged Greece's important contributions to the United Nations across the international agenda, and thanked the people of Greece for their global citizenship.

“Despite the country's own economic troubles, Greece has been generous in saving lives,” he said. However, “Greece should not be left to address this challenge on its own,” he added.

“I remained deeply distressed at the high number of deaths in the Mediterranean. We must work together to protect people and address the root causes of displacement. I continue to call for greater sharing of this responsibility across Europe and, indeed, across the world,” he said.

Mr. Ban and the Prime Minister also discussed the conflict in Syria, recent terrorist attacks and other challenges that are causing large-scale suffering and instability, as well as the Middle East peace process.

On the progress made by the Greek Cypriot and Turkish Cypriot leaders in their talks, which were conducted under Mr. Ban's good offices and facilitated by his Special Adviser Espen Barth Eide, the UN chief welcomed both leaders' commitment, expressed in their joint statement last month, to reach a solution within the year.

Finally, they discussed the 2030 Agenda for Sustainable Development and the climate change challenge. Greece joined 176 other nations in signing the landmark Paris Agreement two months ago in New York.

“Now we must bring the agreement into force as soon as possible -- and work for the Sustainable Development Goals (SDGs),” Mr. Ban said.

He also met with President Prokopis Pavlopoulos yesterday and with Foreign Minister Nikos Kotzias today before leaving for Lesbos, a Greek island, which has become migrants' entry point to Europe.

Meanwhile, ahead of World Refugee Day, the Office of the UN High Commissioner for Refugees (UNHCR) has recently launched the #WithRefugees petition, which aims to gather public support for the growing number of families forced to flee conflict and persecution worldwide.

UN agency issues recommendations on integration of refugees in Europe 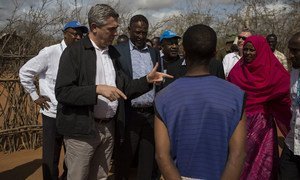 Ahead of the World Refugee Day on 20 June, more than 60 film, TV and music stars have joined refugees, faith leaders and the United Nations refugee agency staff to back a petition highlighting the plight of forcibly displaced people.