UNHCR/Giles Duley
With fear etched on their faces, clearly still suffering from the trauma of a rough by boat across the Aegean, an Afghan family arrives in Lesbos, Greece (2015).
17 June 2016
Migrants and Refugees

Most recently, Mr. Duley’s focus has been on the refugee situation in Europe; in October 2015, he began a project documenting their flight from conflict in the Middle East, starting from Lesbos, Greece, where an unprecedented number of people have arrived via tumultuous, and often deadly rides across the Mediterranean Sea.

The photographer’s goal was to accompany their journey through the Balkans, and witness their arrival at reception centres in Berlin, Germany. But instead of showing more familiar visuals associated with this crisis, such as images of migrants jumping off boats, he wanted to show the details. These smaller and more personal things, he felt, could help bring the women, men, and children refugees closer to the rest of the world.

Ahead of World Refugee Day, marked annually on 20 June, the UN News Centre spoke with Mr. Duley on what he aims to capture and about what drives his work.

My main motivation is to go to those places and connect with families, with individuals, with communities and really find a way to tell their stories.

UN News Centre: As a photographer you have been travelling to places like Lesbos in Greece, Sudan, Afghanistan, or Jordan where you were recently, what drives you the most in this journey as a photographer?

Giles Duley: For me, it is always about humanizing the stories; it is very easy to become overwhelmed by statistics and become detached from these stories. So my main motivation is to go to the places and connect with families, with individuals, with communities and really find a way to tell their stories. I am really interested in the normalcy of life, the little things that go on; like a father brushing his daughter’s hair; a mother preparing food for her child; or a grandparent walking children to school.

UN News Centre: How did your collaboration with the Office of the United Nations High Commissioner for Refugees (UNHCR) on the refugee crisis start?

Giles Duley: I am working on a long term project called Legacy of War, which looks at the long term impact of conflicts on communities around the world; I am very interested in what happens to the civilian caught up in conflicts 10, 20, 30, 70 [or] 100 years after war ends. And as part of that project, UNHCR got in contact and asked if I would collaborate on looking at the refugee crisis through the Middle East and in Europe. 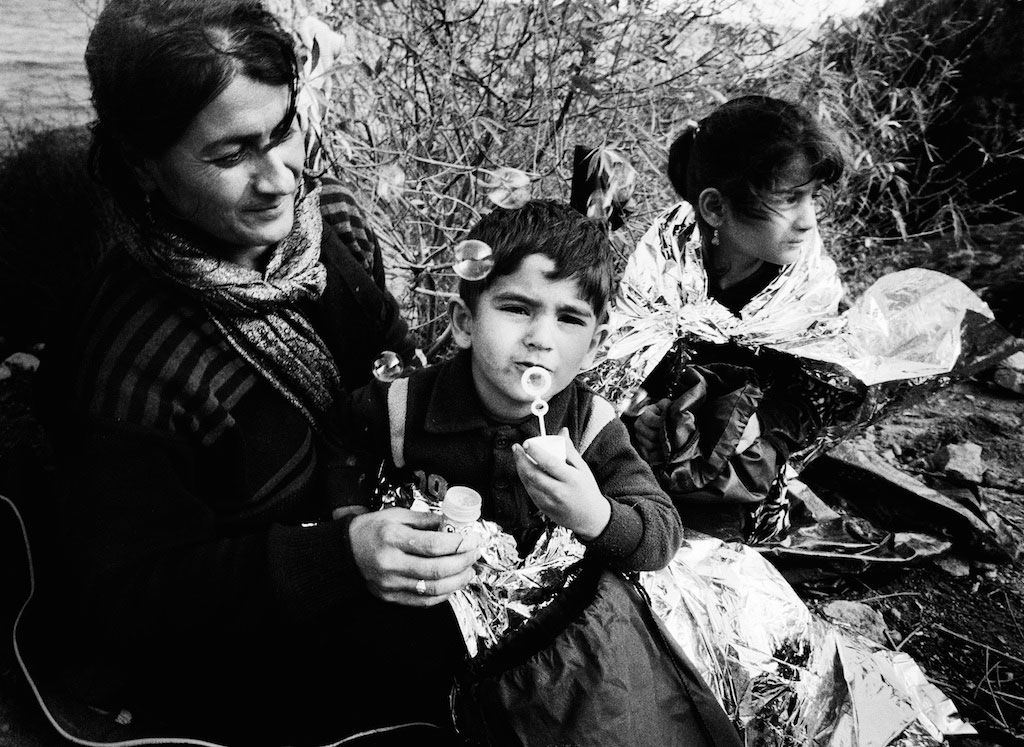 Young boy blowing bubbles with his aunt, who is trying to keep his mind off the fact that his mother collapsed after their boat arrived in Lesbos, Greece. (2015) UNHCR/Giles Duley

UN News Centre: And the groundbreaking British band Massive Attack is including your pictures in its European tour, how did this collaboration come about?

Giles Duley: I have known the guys from Massive Attack for nearly 25 years – I knew them back when I was a music photographer. When I do a project like this, telling the stories of the refugees, it is as important collecting the stories as it is […] making sure people hear [them].

I think it’s really important to engage with audiences that wouldn’t necessarily be looking at newspapers or watching the news on TV; and so I was trying to find different ways of getting these stories out and I thought about the guys from Massive [Attack]. They’ve always been very involved in political issues and wanting to make statements, and so I said to them “is there a way that we could collaborate?”

I actually called [the band] when I was on the beaches in Lesvos and I was thinking I needed to get this story out, so I rang them from there and really just described to them what I was witnessing and without any kind of consideration they just said straight away “we would love to show these photographs through our tour.” And so we planned to have these photographs as part of the concert, but they decided to show it at the end of the concert, when the music is finished.

I was quite nervous about it, wasn’t sure how people would respond, but it actually was incredibly moving to see everywhere – from London to Berlin, Italy to Spain – when people saw these images at the end of the concert, they stood there and applauded. It was a very, very moving scene as a photographer to see how people responded so positively to these stories. 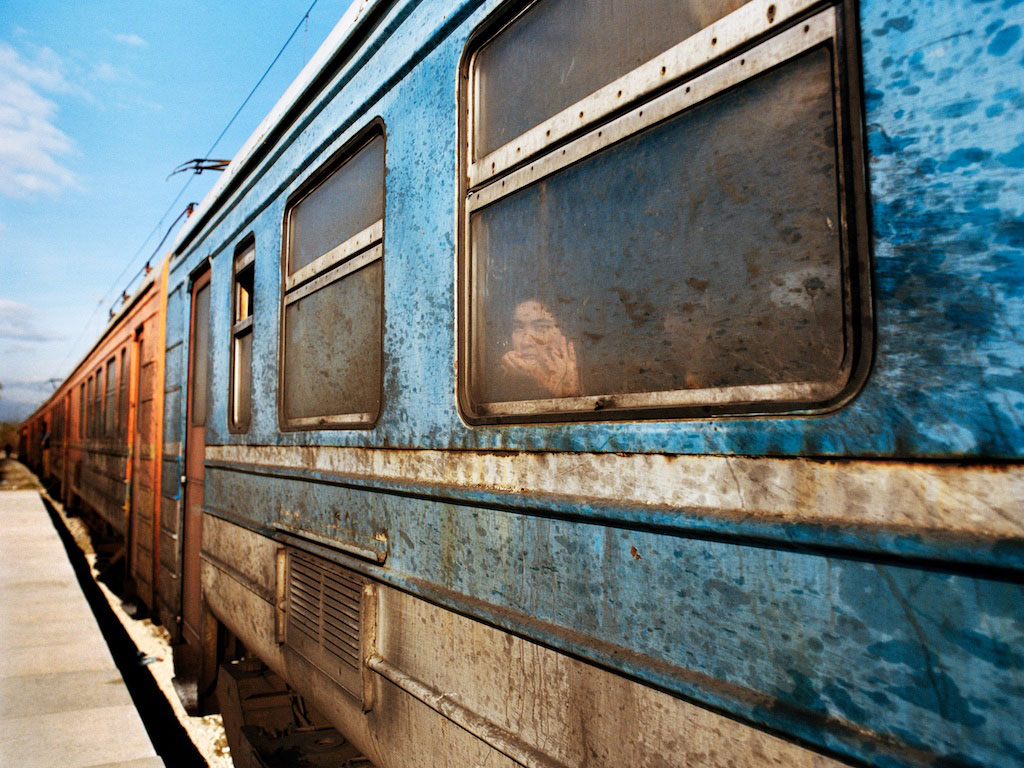 Train heading through the Balkans. This image represents the sense of longing present in many of the refugees from Syria, Iraq or Afghanistan. (2015) UNHCR/Giles Duley

UN News Centre: So you come from a totally different universe, from music and fashion. How did this move [to photographing refugees] happen?

Giles Duley: (laughs) Yes, I started as a music and fashion photographer and that was an amazing 10 years of my life, but there was always a sense that I could do something more with my work. I was always frustrated, I felt that I could be telling stories, I could try to do something useful with my photography, so I gave it all up and chose the other path of being an humanitarian documentary photographer and I have to say, it was the best decision I ever made because it was the first time in my life that by telling other people’s stories I felt that I was doing something useful with my love for photography.

UN News Centre: Your pictures are often referred to as ‘true.’ Is that what you try to capture – the truth of these countries torn by war?

Giles Duley: I think it’s really important, as I said, to show the individual stories; there is no such thing as a single truth in any of these conflicts or in any of these humanitarian disasters. For me, it is just simply about recording what I witness, that’s what I always say: all I can be is a witness to these events and, rather than looking at the huge overall picture, it’s by witnessing how a conflict affects a single family, how a war affects a single individual, and just by telling their truth, hopefully it gives us some insight in understanding what people have to go through.

UN News Centre: In an interview published in your book One Second of Light, you talk a little bit about your accident in 2011 and about how journalists started saying that you became a different photographer because that’s a story that is easier to sell. But in a video, you recall the first time you saw your sister after the accident, when you said “I am still a photographer.” Do you feel that you look at things in a different way; do you think that influences your work?

Giles Duley: Absolutely, I feel that all my injuries… you know, my approach and my desire was very similar, that was always to try to create empathy with people in circumstances very different from us. I never saw people as victims, but victims of their circumstances, and I always wanted to try and help create connections with those stories so people in the western world would maybe understand and see people as individuals as opposed to just being statistics, so I think my approach was there. 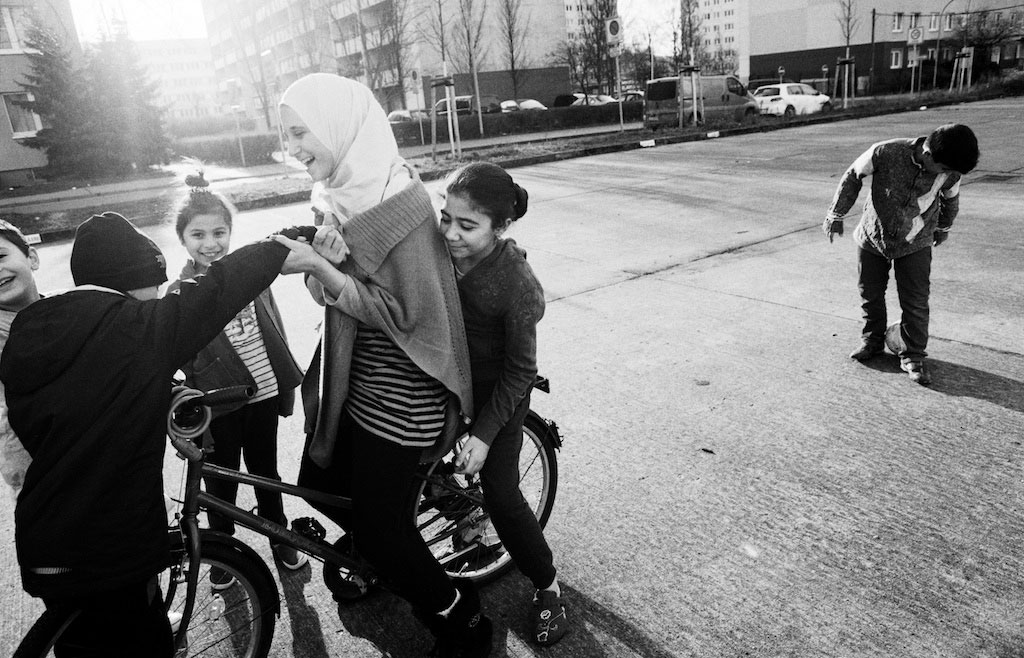 Children from Iraq and Syria at a playground outside a reception centre in Berlin, German, where some of the families were being housed temporarily (2015). UNHCR/Giles Duley

But when I got injured, within a few days of that injury I remember arriving back in the UK, I was struggling really between life and death and most people thought I wouldn’t make it but my sister saw that I was trying to say something so they took my mask off and the only words that came out were ‘I am still a photographer.’ And even at that stage, when really many people weren’t sure if I would live, I was already thinking of how I could return to photography and how my experience would actually make me a better photographer.

One of the hardest things doing the work I do is travel to these places to see people suffering, to take their photograph and then know that you can just get on a plane and leave them, and what I realized was that I would be in a situation where many people I am photographing [I would have] gone through a very similar experience, and I would understand what it was like to be injured in a conflict and to live with those scars.

So strange as it may sound to a lot of people, although I have many disadvantages following my accident, I actually think I am a better person, and I am most definitely a better photographer.

Ahead of the World Refugee Day on 20 June, more than 60 film, TV and music stars have joined refugees, faith leaders and the United Nations refugee agency staff to back a petition highlighting the plight of forcibly displaced people.