Over the past two days, humanitarian convoys have delivered aid to thousands of beneficiaries in several besieged areas of war-torn Syria, including some 50,000 beneficiaries in Afrin, in the country’s north, and an estimated 37,500 residents of Al-Waer, near Homs, according to the United Nations relief wing.

The UN Office for the Coordination of Humanitarian Affairs (OCHA) also reported that a second convoy to Al-Waer, pending Government approval, will complete deliveries to the rest of the estimated 75,000 population is planned in the coming days.

The convoys carried health supplies, including insulin, emergency health kits, burn kits, medicines for non-communicable diseases and materials for dialysis, as well as food, education and other emergency supplies.

On 9 June, the food leg of the convoy to Darayya carried food for some 2,400 people. The parcels are estimated to feed the beneficiaries for about one month.

In Geneva, OCHA spokesperson Jens Laerke told reporters at the regular press briefing that a third convoy planned to Kafr-Batna and had not gone through due to last-minute logistical complications and that it would proceed in the coming days. He added that the UN is seeking permission to go back to Darayya, and approval to go to all besieged locations in Syria.

Tarik Jasarevic, a spokesperson for the World Health Organization (WHO) also informed reporters that there had been no reported removals of medical supplies on 16 June, adding that in the past week, there had been some removals. 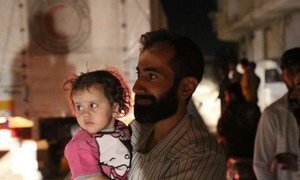 Syria: UN agencies reach families with food in the besieged town of Darayya

The United Nations World Food Programme (WFP) today announced it delivered food for the first time since 2012 to the besieged town of Darayya, a suburb of Damascus, as part of a joint UN and Syrian Arab Red Crescent (SARC) convoy.