On Day to Combat Desertification, UN calls for action to restore land resources

“The livelihoods and well-being of hundreds of millions of people are at stake,” the Secretary-General said in his message to mark the

“Over the next 25 years, land degradation could reduce global food productivity by as much as 12 per cent, leading to a 30 per cent increase in world food prices,” he added.

Ranking among the greatest environmental challenges of our time, desertification is a phenomenon that refers to the persistent degradation of dryland ecosystems by human activities – including unsustainable farming, mining, overgazing and clear-cutting of land – and by climate change.

The Day – which is observed annually on 17 June – is intended to promote public awareness of the issues of desertification and drought, and the implementation of the UN Convention to Combat Desertification (UNCCD) in those countries experiencing serious drought and/or desertification.

Many children can no longer go to school because they are forced to look for water. To escape the heat, they begin their search at night usually coming home the next day in the sfternoon. Photo/UNICEF

In his message, the Secretary-General emphasized that more than 50 per cent of agricultural land is moderately or severely degraded, with 12 million hectares lost to production each year.

The Secretary-General emphasized that without a long-term solution, desertification and land degradation will not only affect food supply but lead to increased migration and threaten the stability of many nations and regions.

“This is why world leaders made land degradation neutrality one of the targets of the Sustainable Development Goals [SDGs]. That means rehabilitating at least 12 million hectares of degraded land a year,” he said.

One important approach towards achieving that goal is sustainable, climate-smart agriculture, Mr. Ban said. That will help communities build resilience to climate change, while also supporting mitigation by taking carbon from the atmosphere and putting it back in the soil.

“The transition to sustainable agriculture will also alleviate poverty and generate employment, especially among the world's poorest. By 2050, it could create some 200 million jobs across the entire food production system,” the UN chief said.

“On this Day, I urge cooperation among all actors to help achieve land degradation neutrality as part of a broader effort to achieve the Sustainable Development Goals and build a future of dignity and opportunity for all,” he added.

In another message to mark the Day, Irina Bokova, the Director-General of the UN Educational, Scientific and Cultural Organization (UNESCO), underscored that desertification is a threat to both arid and non-arid regions, where land over-exploitation, including intensive farming, forest exploitation for fuel and timber and overgrazing have turned fertile soils into sterile land.

“The stakes are high – this is why the goal of achieving land degradation neutrality is so important. This is set out in Target 15.3 of the new Sustainable Development Goals, to maintain and even improve the amount of healthy and productive land resources,” she added.

The Director-General highlighted that the UNESCO Man and the Biosphere Programme, International Hydrological Programme and Global Action Programme on Education for Sustainable Development are working to engage people in sustainable land management practices and agro-forestry, in developing green economies, in consuming responsibly, and in restoring ecosystems.

“Desertification is not always irreversible. Land restoration is the ultimate tool, and UNESCO is determined to do everything to restore our ecosystems, as was featured during the World Congress of Biosphere Reserves, held in Lima, in March 2016,” Ms. Bokova said.

“Desertification is a global threat that requires global action – this must start with each of us, with our deeper engagement to protecting our planet for all to share,” she added.

The drought in the province of Jowzjan, north of Afghanistan, became unproductive land. UNHCR/ V.Tan

For her part, UNCCD Executive Secretary Monique Barbut emphasized that land degradation neutrality should be a top policy goal for every nation that values freedom and choice.

“Conserving land and restoring that which is degraded back to health is not a benefit that only flows to the billions of people who eke out a living directly from the land,” Ms. Barbut said.

“It is a vote to safeguard our own freedoms of choice, and those of our children. It is also a moral standard against which we may well be judged by history,” she added.

The Executive Secretary also noted that the inclination to degrade new land instead of fixing and re-using the land that is already degraded means that future generations cannot benefit from the same resources.

“The rights we claim to enjoy these land resources come with a heavy moral obligation to manage them well. More so, as we may be, literally, the last generation that can significantly slow down the accelerated loss of the land resources left,” Ms. Barbut said.

“This generation – our generation – has the time, human, knowledge and financial means to reverse these trends, and restore a vast amount of the degraded lands. But we must work together,” she stressed. 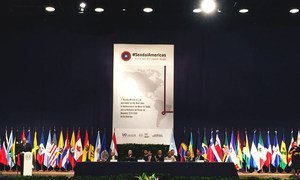 Disaster risk reduction is everyone's business, a top United Nations official said today at the opening of a first-ever high-level meeting on strengthening disaster response and building capacities in the Americas, long considered one of the world's most exposed regions.