Participating in the St. Petersburg International Economic Forum, United Nations Secretary-General Ban Ki-moon highlighted the importance of translating the various landmark agreements made by the international community during the past year into action as soon as possible.

“We are gathering at a very important moment, when many people may be frustrated that we are living in an era of peril and many challenges. But at the same time, in a positive way, we can say that we are living with some great visions and hope for the better future,” the Secretary-General said.

The UN chief noted that in 2015, world leaders agreed to four important visions and commitments, including the Sendai Framework for Disaster Risk Reduction, the Addis Ababa Action Agenda on financing for development, and, most importantly, he said, two visions – the Sustainable Development Goals (SDGs) and the Paris Agreement on climate change.

“These four visions and frameworks give us quite a big sense of hope and expectation,” Mr. Ban said. “Our shared challenge is to translate these visions into action as soon as possible, at the latest by 2030,” he said.

The UN chief underscored that Russia, as a founding member of the UN and as a permanent member of the Security Council, has a very important role to play, adding that he counted heavily on the leadership of Russia.

Thanking Russia for signing the Paris Agreement on climate change in April, Mr. Ban called on all countries to ensure that the Agreement is ratified as soon as possible.

“By the end of this year we need 55 countries and 55 per cent of global greenhouse gas emissions accounted for to make this climate change agreement come into effect. That is most important,” he emphasized.

He also urged countries to diversify, particularly those countries – including Russia – that have been dependent on high commodity prices, such as those of gas or petroleum. Noting that this year’s St. Petersburg Forum includes a session on “life after oil,” Mr. Ban said he had no doubt that Russia’s engineers and entrepreneurs can help the world to usher in a new energy future.

In addition, the Secretary-General stressed that there is an urgent need to protect Russia’s vast forests, and to prevent illegal logging preserve such forests.

Turning to the private sector, Mr. Ban noted that as the UN continues to forge ever stronger ties the sector, one main platform for engagement is the UN Global Compact, which has brought about 8,000 companies – including 100 big companies in Russia – together to advance sustainability through the adherence to some 10 principles.

“Starting from labour standards, management and labour relationship, environmental protection, human rights, anti-corruption issues, good governance, these are the basic principles, which not only business communities, but our societies should adhere to,” the Secretary-General said.

In that vein, he said that the 2030 Agenda provides new arenas in which to work together, for the benefit of all.

“It is also important to make sure that there should be nobody, not a single person, who will be left behind. So everybody should be put on board. This is a very ambitious vision to put all 7 billion people and our planet Earth onto [a] sustainable path,” Mr. Ban said.

In that regard, the Secretary-General pointed to the importance of having good infrastructures, and praised the Government of Russia for working very closely with the Asian Infrastructure Investment Bank and the New Development Bank.

“I would also like to stress the critical importance of further economic integration and cooperation in this region. At the moment, however, we see countries breaking ties and building new barriers,” Mr. Ban said.

“History tells us that this is not the right direction for Europe. We need to strengthen ties and build bridges, instead of building walls,” he added.

Noting that the UN is “well placed to facilitate this dialogue,” the Secretary-General said the UN is working closely through the UN Economic Commission for Europe (UNECE), as well as all other European countries.

“The world needs a Europe in 2030 with more trade, more transport, more tourism – and more cooperation. This will help us to achieve sustainable development,” the Secretary-General said.

Working towards a sustainable future

The Secretary-General also discussed what he called a “very important issue that will really make our society economically and socially prosperous and safer.”

“And that is what we have to do to prevent and counter terrorism and extremism. We have been suffering a lot, too much. We cannot let this kind of situation continue; that is why we fully support coalitions fighting in Syria against Da’esh but at the same time it is important to prevent why this extremism and terrorism happens, we need to address the root causes,” he said.

Secretary-General Ban Ki-moon (centre left) on his way to speak at the opening ceremony of the St. Petersburg International Economic Forum in the Russian Federation. UN Photo/Rick Bajornas

He emphasized that for that reason, he had presented to the General Assembly about 70 recommendations that Member States will analyse and apply to their circumstances.

The Secretary-General also stressed that Governments should work very closely with civil society as well as business communities, although he said he is “deeply concerned” by the escalating pressures being faced by civil societies in many parts of the world, including restrictive laws, infringing on the rights of media and freedom of expressive, and unlawful restrictions on human rights defenders and non-governmental organizations.

“This shrinking political space for civil society, that [is what] really hampers smooth and sustainable development of our societies,” the Secretary-General said.

“The silencing of the media only quiets the voices that we need to hold leaders accountable. When civil society can play its full role, all of society benefits,” he added.

The necessity of economic reform

The Secretary-General also noted that the Government of Russia has initiated studies for economic reform, which he said is widely recognized as necessary.

“I am convinced that Russian civil society can play an active role in working together with the Government, informing and reforming this economic system,” he said.

The UN, for its part, has tools, means, resources and expertise to offer in supporting civil society’s efforts, both in Russia and around the world, the Secretary-General said.

“These are times of turmoil, as I said, but above all this remains an era of opportunity. If we are united, I am sure that the economic and social transformation into a sustainable pathway will really help us in overcoming all these crises,” Mr. Ban concluded.

♦ Receive daily updates directly in your inbox - Subscribe here to a topic.
♦ Download the UN News app for your iOS or Android devices.
economic 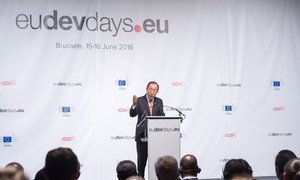 On the second day of his visit to Brussels, Belgium, United Nations Secretary-General Ban Ki-moon addressed the opening ceremony of the European Development Days forum and participated in a commemoration for the victims of the March airport bombing attacks in the city.