The first-ever United Nations-sponsored regional forum for Action on Albinism in Africa will take place in Dar es Salaam, Tanzania from 17 to 19 June to develop specific measures to tackle the attacks and discrimination faced by persons with albinism in several countries in the region.

Persons with albinism in the region of Sub Saharan Africa are facing some of the most extreme forms of human rights violations. They face physical attacks fuelled by erroneous beliefs that their body parts can be used in potions and in other witchcraft practices. A majority of victims are women and children. They also face entrenched discrimination and stigma extending to their family members particularly mothers of children with albinism.

Confronted by these challenges, many civil society organisations, persons with albinism, and states wish to design new ways of dealing with the issues while adopting those that have been tested and true.

“There are a lot of specific, practical, simple and effective measures that some countries have successfully used to tackle the issues faced by persons with albinism including having a dedicated office and budget on the issue, creating a telephone hotline to report crimes and threats, regulating 'witchcraft' and traditional medicine practitioners among others,” said the United Nations independent expert on albinism, Ikponwosa Ero.

“But these ideas have to be shared as best practices and developed into a continental roadmap to successfully tackle the issue,” she added.

This is why on the heels of international albinism awareness day which just concluded on 13 June, over 150 people from 28 countries in the region will gather this week in Dar es Salaam to lay down a roadmap of specific measures aimed at dealing with the human rights issues faced by persons with albinism.

Half of the participants are from civil society, about 20 percent from government, 10 percent from national human rights institutions and there will also be human rights specialists from within and outside the African Union and UN as well as academics.

“As the continent of Africa celebrates the decade of human rights, and the UN launches the 2030 Agenda for Sustainable Development which pledges to leave no one behind, we have a good context in which to plant this forum,” Ms. Ero said.

“It is not going to be easy to come up with specific measures for all the issues arising out of the problems faced by persons with albinism, but the best practices of some States and civil society to date will represent a key step forward in promoting and protecting their human rights,” the expert stressed.

♦ Receive daily updates directly in your inbox - Subscribe here to a topic.
♦ Download the UN News app for your iOS or Android devices.
human rights|albinism 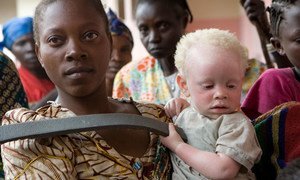