Condemning the flow of arms and related materiel into the North African country, including to terrorist groups, the 15-member body said it made the decision to authorize such inspections “in these exceptional and specific circumstances” for a period of 12 months from today, and with Member States engaging in “appropriate consultations” with Libya's Government of National Accord.

The Council also said that the inspections would be authorized “provided that those Member States make good-faith efforts to first obtain the consent of the vessel's flag State prior to any inspections,” and called upon all flag States of the vessels to cooperate with such inspections.

In the resolution, the Council reiterated its grave concern at the growing threat of terrorist groups in Libya proclaiming allegiance to the Islamic State in Iraq and the Levant (ISIL/Da'esh), the growing trend of groups associating themselves with it, as well as the continued presence of other Al-Qaida-linked terrorist groups and individuals operating in the country.

Expressing deep concern at the threat posed by unsecured arms and ammunition in Libya and their proliferation, including through their transfer to armed groups in violation of the arms embargo, the Council also underlined the importance of coordinated international support to Libya and the region to address such issues.

The Council also expressed concern that the situation in Libya is exacerbated by the smuggling of illegal arms and related material in violation of the arms embargo, underlining its concern at the allegations of violations of the arms embargo by sea, land, or air. Further, it expressed concern that such arms and related material are being used by terrorist groups operating in Libya, including by ISIL.

Further to the text of the resolution, the Council reaffirmed its determination that terrorism, in all forms and manifestations, constitutes one of the most serious threats to peace and security. In addition, the Council condemned the flows of arms and related material transferred to or from Libya in violation of the arms embargo, including to ISIL and other terrorist groups in Libya. 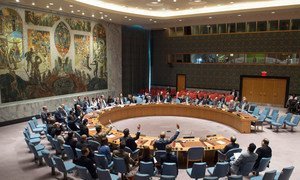 The Security Council today decided to extend until 15 December 2016 the mandate of the United Nations Support Mission in Libya (UNSMIL), encouraging the operation to re-establish a permanent presence in the country through a phased return.