In Brussels, Ban urges joint efforts against terrorism and in addressing displacement

In a press conference following a meeting with Jean-Claude Juncker, the President of the European Commission, and a number of European Union (EU) commissioners, the Secretary-General recalled that on 22 March, the world grieved with Brussels as the vibrant and diverse city experienced horrific violence.

“At the time, I expressed hope that Europe's commitment to human rights, democracy and peaceful coexistence would be the 'true and lasting response to the hatred and violence,'” Mr. Ban said.

“I urge the people of Belgium and all of Europe to remain committed to these ideals. Leaders and communities have to be steadfast in opposing xenophobia, discrimination and violence,” he added.

Commending Mr. Juncker's leadership in efforts to forge a common European and global response to the large movements of refugees and migrants, the Secretary-General said he appreciated all efforts to ensure greater responsibility sharing among European States.

Mr. Ban also emphasized the need to support communities to be able to host the large number of arrivals, as well as to develop ways to work together to address the root causes of displacement and ensure better protection. In that vein, he said he remained “deeply distressed” at the high number of deaths in the Mediterranean.

Mr. Ban also noted that he had discussed with Mr. Juncker the support of the EU to the efforts of the Greek Cypriot and Turkish Cypriot leaders to bring about a peaceful settlement in Cyprus, under the auspices of the UN's Good Offices. The two officials also exchanged views on disaster reduction, humanitarian action and sustainable development.

“The EU was instrumental in supporting the adoption of the Sustainable Development Goals (SDGs) and the Paris Agreement on climate change,” the Secretary-General said. “As we embark on implementing these landmark accords, I count on the EU to continue leading by example.”

Mr. Ban commended EU Member States for taking steps to align their national development plan with the 2030 Agenda for Sustainable Development, and thanked the EU for signing the Paris Agreement. In addition, he urged the EU to work to accelerate the process for the Agreement's early entry into force.

“In addressing the pressing issues of our time, the norms and values of the UN Charter remain our guide,” the Secretary-General said.

“At the core of the Charter is the belief that cooperation between the UN and regional bodies is essential for preventing and resolving conflict, protecting human rights and achieving a better world for all,” he added, noting that the UN-EU partnership is an “inspiring example of what is possible when we work together.”

Earlier in the day, the Secretary-General, along with Mrs. Ban, met with refugees, migrants and staff at Le Point Soupe de Vivre Ensemble, a local soup kitchen in Brussels. 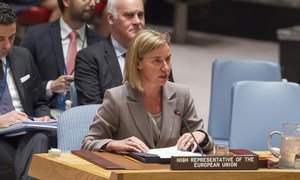 In order to face and overcome the various political and humanitarian crises occurring around the world, working together in a spirit of cooperation and multilateralism must be a priority for both the United Nations and the European Union (EU) – and indeed, all countries worldwide – a top EU official told the Security Council today.