Given the unchanged nature of the conflict in Darfur, Sudan, the mandate of the African Union-United Nations mission there should be extended for another year, without changes to its priorities or its authorized troop and police ceiling, the top UN peacekeeping official said today.

Little progress has been made in finding a viable political solution to the conflict, said Hervé Ladsous, Under-Secretary-General for Peacekeeping Operations, as he briefed the Security Council on the outcome of a recent assessment of the situation in Darfur from 1 July 2015 to 15 May 2016.

The assessment was contained in the Special Report of the Secretary-General and the Chairperson of the AU Commission on the African Union-UN Hybrid Operation in Darfur (UNAMID).

The report provides an analysis of military and police components, and presents recommendations on how to improve the operational effectiveness of UNAMID, as well as an update on the status of tripartite discussions on the exit strategy of UNAMID among the AU, UN and Sudan's Government.

Mr. Ladsous said the sectarian violence emanating from disputes over access to land, water and grazing areas remain a major cause of insecurity in Darfur. While direct clashes between the Government and armed movements have subsided, fighting with the Sudan Liberation Army/Abdul Wahid (SLA/AW) in Jebel Marra, which rejects any negotiations with the Government, has continued.

As of today, 2.6 million people remain displaced across Darfur. The Office for the Coordination of Humanitarian Affairs (OCHA) has reported 80,000 verified displaced persons since the resumption of fighting in Jebel Marra in mid-January. As many as 127,000 displaced persons were yet to be verified. Further, 1.6 million civilians continue to reside in some 60 camps for internally displaced persons (IDPs) in the region.

UNAMID continued to face considerable challenges in its relations with the Government, which impeded the implementation of its mandate, including denials of access and freedom of movement, particularly to conflict areas such as Jebel Marra, and denials and delays in the issuance of visas and the clearance of shipment containers at Port Sudan.

The UN and AU continued their discussions with the Government on the development of an exit strategy for UNAMID.

Given the current situation in Darfur, the assessment concluded that the strategic priorities of UNAMID and their corresponding benchmarks remain valid. Within this framework, the Chairperson and the Secretary-General therefore recommended for UNAMID to focus its activities on, first, protecting the displaced population and, second, addressing more comprehensively inter-communal violence, Mr. Ladsous said.

In a situation of continuing armed conflict, inter-communal violence and attacks against civilians, the current security conditions in Darfur are not conducive to a large-scale return of IDPs to their places of origin, he said.

A review of the effectiveness of the military and police components recommended for the current number of military and police personnel to be retained, he said, adding, however, that within the existing capabilities, the Mission should enhance their overall flexibility by reinforcing troops at sites of greater operational significance while reducing or closing others. The Mission could also create a highly mobile reserve military capability and an increased field presence of police officers.

He called upon all parties to continue efforts in good faith to achieve the much-needed cessation of hostilities in Darfur and work towards ensuring a credible and inclusive National Dialogue process.

Yesterday, the AU Peace and Security Council endorsed a recommendation to extend the mandate of UNAMID for 12 months until 30 June 2017, without modification to its priorities or its authorised troop and police ceiling, Mr. Ladsous said, urging the UN Security Council to similarly do so. 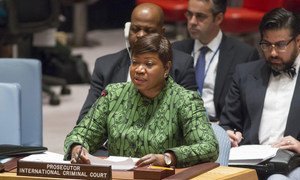 More than a decade has passed since the situation in Darfur, Sudan, was referred to her Office, yet the victims' quest for justice is still far from being realized and they continue to be subjected to grave crimes and suffering, the Prosecutor of the International Criminal Court (ICC) told the United Nations Security Council today.